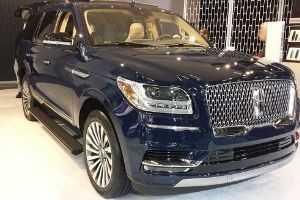 (Photo : en.wikipedia.org)
Blaming SUVS is not right because there are more causes for carbon emissions. SUVSkram is unfair and should be justified, there are other guilty parties.

SUVS are eating a chunk of Fossil Fuel Savings

Recent studies have revealed that SUV use is just second to produce carbon emissions, first is the power generation firms. So, blaming SUVS as the prime cause is very sketchy at best. Another slant to that is the power sector is the one, responsible for generating electricity for everything including EV charging grids.

Increased use of EVs is prompting more than one sold, in five cars. There will be more EVs in showrooms, with SUVS. More EVs sold will need more oil to be produced, leading to the same problem again.

Read: LA Auto Show 2019: 6 Reasons Why There are More e-SUVs This Year

With that reference in mind, plus EVs get power from burning fossil fuels. That is deuce even if the guy drives a green EV, which is an irony is not? Based on that observation, anyone caught riding an EV is just as guilty. But, he's riding a newfangled-EV, not a huge SUV with lots of carbon emissions. Who is the guiltier party anyway?

Compared to smaller sedans, an SUV is more expensive and do not forget about how much for gas. But, this is prime real estate on wheels. Why settle for condo aka car, when you can get a mansion (SUV) with all the perks. Plus, get an SUV with 4X4 and a tank-likee chassis, makes it nearly invulnerable too.

But, for cars that are shorter with FWD and a lot easier to stop than a lumbering SUV. All the fancy stuff is standard, just add snow tires or all-season ones where you live in. Another is cheaper to fuel up than an SUV. Most car buyers are getting EVs for the sake anyone chooses an SUV. That boils down to status and how the car makes us look to others.

Driving an SUV will not be the end

Owners of SUV are trying their best to get less carbon into the environment. There are more sources of carbon emissions than SUVS as claimed. The Thunberg Effect is felt by everyone, but SUV owners are willing to do something and are willing to make changes. Other government influences and final adjustments are made.

Before blaming SUVS, there are other aspects of the zero-emission problem to solve. Anyone on an SUV has not a greater fault, compared to the guy on the EV. SUVS are partly to blame for the environment snafu, there are other causes that can be connected to it. Even EVs do not have clean hand, more oil is needed to feed the demand for more power. A deuce, is it not?

Related Article: You can care about climate change and still drive an SUV. I do.