Driving in Wintertime: How to Avoid and Control Oversteer When Driving on Snow 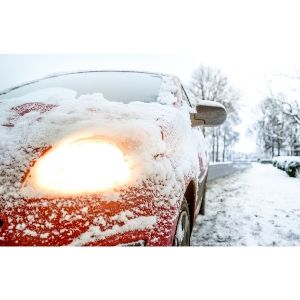 (Photo : pexel via canva.com)
Knowing how to avoid and control oversteer is a vital skill. Driving on snow and the winter belts where drivers are exposed to hazards of skidding or sliding. This will save anyone in a pinch!

During wintertime, the roads are on the slick side with snow and ice all over. if the car hits black ice that will do one number on the car's front and back balance. Knowing how to avoid and control oversteer is a vital skill. Driving on snow and the winter belts where drivers are exposed to hazards of skidding or sliding. This will save anyone in a pinch!

Oversteer causes the rear wheels to lose traction in snow or ice. It might be rapid or gradual, but it depends on how it is counter-acted. Cars with front-wheel drive are guilty of this problem. When driving solo, when the car is at its lightest. Chances of an FWD going oversteer is very possible, so these explanations will show why it happens.

Factors of speed, how much brakes are applied, and whether solo drive or with companions. This time of the season, there will be instances that lead to accidents or pileups.

These are the common causes of oversteering that most might take for granted. For cars, Newton's Laws of Motion can be felt here in this particular situation.

1. Hitting the corners too fast.

Driving into corners on snow mountains and snow-covered roads is dangerous at a curve. Speed is not good, better slow down. Even winter tires have their limits and not foolproof.

2. Never enter a corner too sharp.

Getting and feeling the grip on the road is important! Sharply entering a curve will shift the weight of the car and affect positive traction when lost is deadly.

3. Releasing the gas when in mid-turn.

When going up a road curve or a snow road there will be traction gained with a steady grip. Keep on a steady throttle to keep going up or down to keep the momentum.

4. Braking too hard into a corner is unnecessary.

It is foolish to slam the brakes into a curve because this starts an oversteer if the road is covered in ice or snow. Worse is black ice that is nearly unseen!

Getting out of the cars oversteer step by step

When the car's physics are in haywire mode. Here are the things to remember when recovering the balance of the car. Use a steering lock by pointing into the direction of the spin. Apply the right amount, or spinning in either direction will happen. The key is to look where you are going. Another is to feel out how much grip is getting back. Do not forget to steer in a controlled and precise manner. Do not slam on the brakes and do not fight the car. Getting the car at the right time is the key task. Missing the window of opportunity to escape the spin will be disastrous.

1. Use a steering lock into the spin.
2. Point the cars to where it should go.
3. Feel and find the grip on the road.
4. Once grip is recovered steer out and pullover.
5. Look if you will hit anything on the road and avoid!

Which Has Better Handling and More Control: A Front Wheel Drive or Rear Wheel ...

Keep Your Family from Freezing, Stay Warm on Wintertime with the Best Electric ...