Nothing strikes fear into owners of electric cars than a massive electric power shutdown. Until now, that wasn't much of a concern. When Tesla owners, they found out to their dismay. There was no power in the charging networks, and their vehicles were left with a 0 charge. Which is a worst-case scenario when electric cars cannot run. Unlike petrol-powered cars, that don't have such a problem. It only revealed how vulnerable charging networks of the Tesla 3 and other electric car brands are grossly affected. The power outage took everyone by surprise and left many in Californian practically in the dark.

This unforeseen emergency caused all charging stations in affected areas of Northern California to be replaced with Tesla Powerpacks for charging. As a temporary fix to the problem, that is needed in the meantime. Shutting down power was initiated by PG & E electric company so that wildfire won't be a threat. High winds are a known cause of wildfires which can happen. These inadvertent areas that were affected by the widespread blackout.

Areas that were affected are Fremont, where Tesla has its headquarters and were many electric car owners who drive Tesla, was unable to charge. The mad scramble to get power to Tesla customers has even solar chargers as an extra alternative to power packs. 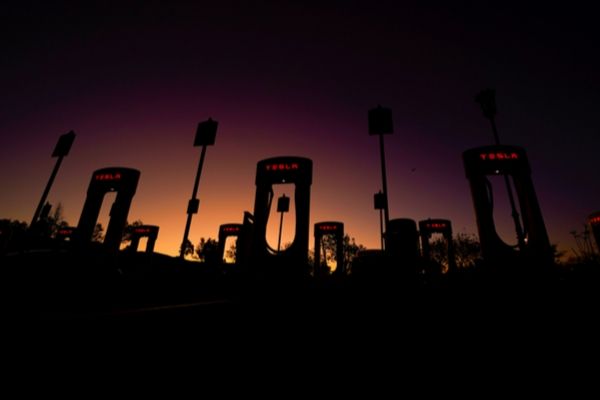 (Photo : Reuters Connect)
Nothing strikes fear into owners of electric cars than a massive electric power shutdown. Until now, that wasn’t much of a concern. When Tesla owners, they found out to their dismay. There was no power in the charging networks, and their vehicles were left with a 0 charge.

PG& E issued statements to explain their action further by shutting down power in Northern California. Fears of a possible wildfire that might be started by dry conditions and strong winds may start fires, unexpectedly. Increasing the risk of fires that can put some areas at risk, especially volatile locations that may not be avoided. Furthermore, when conditions are better and checking their facilities are done. All equipment will be restored and repaired to continue operation. Making amends to their customers and restoring confidence in their services.

Charging networks need a supply of power, and that's the grid which is supplied by power lines.

One solution to keep electric vehicles running is to install the Tesla Powerwall 2 as a backup for such emergencies. Wildfire or power outage will not prevent this device from charging an EV with a full charged! Tesla has stated it can even be an alternative power source in a blackout for about a week! This will cost anyone up to 14,000 $ for the batteries, but installing it will be another expense.

Electric Vehicle Chargers Will be Getting Faster with Updated Charging ...