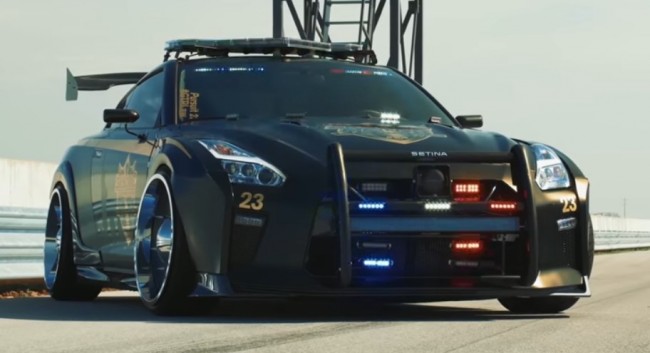 The 2017 Nissan GT-R Pursuit 23 will be unveiled at the 2017 New York Auto Show this month. It is an evil-looking car and will make the red and blue lights of the city's finest look all the more menacing.

The 2017 Nissan GT-R Pursuit 23 will be unveiled at the 2017 New York Auto Show this month. It is an evil-looking car and will make the red and blue lights of the city's finest look all the more menacing.

Pursuit 23. The scary looking cop car has a black wrap and is filled with as many lights as could be fit. There are even LEDs within the NACA ducts found on the hood. In addition, a gigantic rear wing is also suspended from the trunk. It also has a set of adjustable coilover dampers to make it all the more aggressive.

According to a report by CNET Road Show, it also has a "Skyline Metro" graphic which is a nod to the Nissan Skyline. This is the very first, and also arguably the most iconic, car to carry the GT-R badge way back in the sixties. The 23, meanwhile, also references the pronunciation of the Japanese characters for "two" and "three." The Japanese numbers are "ni" and "san," respectively.

Don't let the name fool you. The Track Edition is not some gutted out and lightweight model. It is a combination of the best of both worlds between the Premium "touring" model and the NISMO "racing" variant.

According to another report by Jalopnik, the Track Edition has the same engine tune as the Premium variant. It has a 3.8-liter twin-turbo V6 engine with 6-speed automatic transmission. It has 565 horsepower and 467 pound-feet of torque. It also adds some NISMO features which sharpens the handling and also increases its visual appeal.

The interior also has special leather wrapped Recaro front seats with easy to use switches. Moreover, it also keeps the BOSE stereo with noise cancellation of the base car. While it doesn't have the full works of the NISMO variant, the Track Edition seems like a car that would be decent for everyday driving.

All in all, the GT-R is a performance car that can still beat exotic European cars. While all three variants are a good choice, the Track Edition is probably the best bargain. It may be old and heavy, but it is hard to take down. This is a racing fan favorite and it will continue to stay that way.

The 2017 Tokyo Motor Show Will Bring Back A Lot of Legendary Sports Cars!