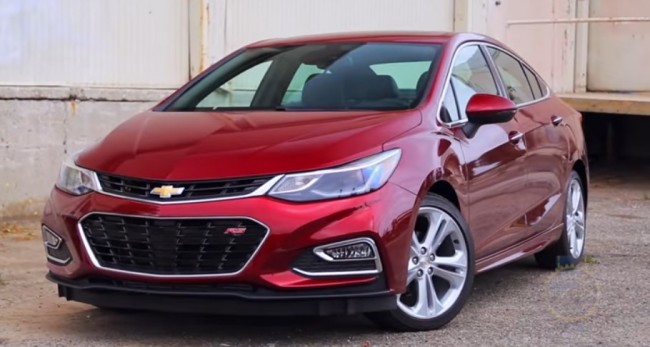 The 2017 Chevrolet Cruze Diesel promises amazing fuel economy, allowing drivers to get pver 700 miles on a single tank of gas. Chevy teamed up with Roadtrippers.com to show people what they can find within 702 miles from their homes.

The 2017 Chevrolet Cruze Diesel promises incredible fuel economy, allowing drivers to get pver 700 miles on a single tank of gas. Chevy teamed up with Roadtrippers.com to show people what they can find within 702 miles from their homes.

According to a report by Ars Technica, Chevy recently announced that its 2017 Cruze diesel will get a whopping 52 mph on the highway. This makes it one of the most fuel economical cars on the market among non-hybrid and non-electric models in America. The automaker even said that it can go an estimated 702 miles on a highway before it runs out of juice.

The new Cruze diesel has a 1.6-liter turbocharged diesel engine. It can produce 137 horsepower and 240 pound-feet of torque. This is standard for a diesel passenger sedan.

The estimated 52 mph highway numbers apply to six-speed manual transmission diesel Cruze sedans. For city driving, the vehicle only gets a 30 mpg estimate. The car also has a 9-speed automatic transmission variant that returns an impressive 47 mpg on the highway and 31 mph in the city. This has start-stop technology that regulates the engine.

The General Motors Vice President Dan Nicholson and Assistant Chief Engineer for Diesel Engines Mike Siegrist discussed the new Chevy diesel engines. The pair stated that after the VW emissions scandal, they wanted to make sure that they comply with the emission standards including diesel cars. Siegrist particularly stated that customers can trust their brand because they are doing all they can to keep carbon emissions to a minimum.

While diesel vehicles are known for getting better fuel economy than gas-powered vehicles, they tend to emit more CO2 and NOx per gallon. This is bad the environment. As such, automakers usually add various systems to their diesel engines to try to reduce the emissions of carbon dioxide and nitrogen oxides.

The 2017 Chevrolet Cruze diesel, in particular, has a selective catalytic reduction (SCR) system. This helps it control its emissions by injecting the car with DEF (Diesel Exhaust Fluid) as the exhaust is produced. The DEF is an aqueous urea solution that reacts with nitrogen oxide to break it down into nitrogen and water.

Apparently, SCR technology has been used by General Motors since 2010. This year they are trying to target more tech savvy customers who mostly drive on the highway for longer distances.

In a report by CNET Road Show, Chevrolet teamed up with the website Road Trippers. The duo aims to show car owners what they can find within 702 miles from their homes, which is roughly the range the new Cruze Diesel offers on a single tank of gas.

Roadtrippers.com has a lot of different filters. Users can hunt for something specific within their area. This can range from vacation rentals, campgrounds, haunted houses, wacky roadside attractions, scenic drives, and even casinos.

Users can find the page here. While attractions along the way are searchable, it doesn't include a filter to find gas stations that have diesel pumps. While 702 miles is quite some distance, it is still best to be prepared considering how diesel is no longer as common as it once was.

The 2017 Chevrolet Cruze diesel starts at $24,670. A hatchback version will be introduced for the 2018 model later this year. What do you think about the new Chevy Cruze diesel? Where would you go within your 702 miles tank radius? Share your thoughts and comments below.