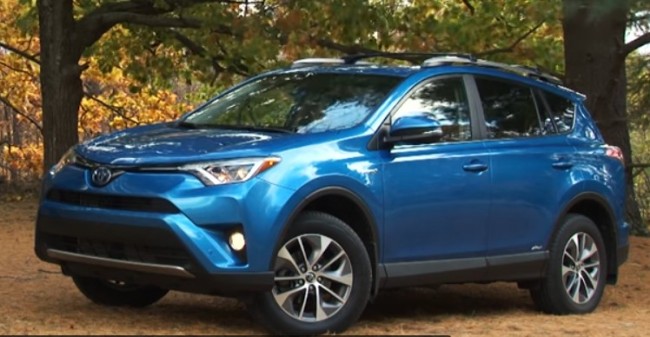 Pros and Features. The Toyota hybrid is surprisingly quicker than the non-hybrid RAV4. While it is not particularly sporty, it is fun and easy to drive. It also has a very refined and comfortable feel especially with everyday driving. The interior also remains very quiet, most especially when using only electric power.

The front is very roomy and passengers will feel very comfortable; however, the rear occupants might feel a little cramped. Visibility is excellent and the controls are each to reach for.

The RAV4 Hybrid has amazing fuel economy! Depending on the driver, it is usually at around 30-43 mpg per gallon. This figure far surpasses that of any other traditional compact crossover. In addition, it only has a very small price premium over a regular, non-hybrid RAV4.

Despite the presence of the hybrid battery pack, there is still ample room in both rows and a rather generous cargo capacity. The top complaint of most hybrid drivers it the lack of space, but with this compact crossover, it is hardly noticeable. It also delivers a very composed, quiet, and comfortable ride.

Cons. The compact crossover hybrid has a synthetic brake feel which isn't at all reassuring. In addition, some of its interior controls tend to feel a little flimsy. The fake leather upholstery is also disappointing.

What's New? According to a review in Cars, the 2017 model has a standard suite of safety systems which the Japanese automaker calls "Safety Sense." This includes a forward collision warning system, automatic high-beam control, adaptive cruise control, and lane departure warning and intervention.

Trims. The 2017 Toyota RAV4 Hybrid comes in three trim levels. Much like the standard RAV4, the trim levels are: XLE, SE, and Limited.

The XLE is the base model but it is loaded with a lot of equipment! It has 17-inch alloy wheels, auto high-beam control on its automatic headlights, foglights, and a sunroof. It also has a 6.1-inch touchscreen interface, keyless entry and ignition, as well as advanced safety systems.

The SE is a crowd favorite. It has all of the equipment from the XLE and adds LED lighting, 18-inch wheels, and simulated leather upholstery. It also has blind spot monitoring with rear cross-traffic alert, heated front seats, and a power lift gate.

According to a review by Edmunds, the Limited trim has it all. It has the same features as the SE and adds front and rear parking sensors, a bigger touchscreen with navigation and smartphone app integration, and driver-seat memory settings.

Verdict. The 2017 Toyota RAV4 Hybrid is an excellent choice for an SUV, and the fact that it's a hybrid makes it all the more appealing. While it does have a slightly higher price point than the non-hybrid, it is well worth it considering the significant fuel economy increase. The RAV4 Hybrid, particularly the SE models, comes very highly recommended by its owners and is the top choice in the hybrid SUV market.

2018 Chevrolet Equinox Could Pose a Huge Threat to the Toyota RAV4 and Honda CR-...