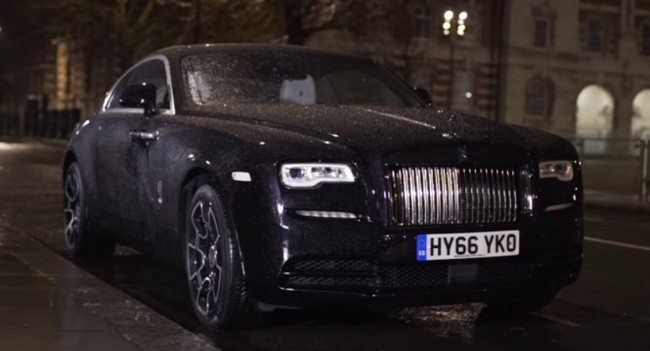 The Rolls-Royce Wraith Black Badge is the automaker's bold new performance model. While the British luxury car manufacturer was a bit nervous about its launch, it is still a great addition to their lineup.

The Rolls-Royce Wraith Black Badge is the automaker's bold new performance model. While the British luxury car manufacturer was a bit nervous about its launch, it is still a great addition to their lineup.

According to Car Magazine, the new Wraith Black Badge was born out of sheer customer demand. A new breed of young, rich, and hip buyers apparently approached the company. They wanted something edgier and less stately. The automaker's response was the Black Badge series.

Wraith Black Badge. The British automaker describes the new Black Badge series as a kind of "alter-ego" for their company. It offers more attitude than any previously seen on a Rolls-Royce before. What sets it apart is that all variants get an exclusive bespoke noir-themed interior and exterior trim treatment. In addition, it also adds subtle adjustments to the chassis and powertrain for a performance boost.

The Rolls-Royce Wraith models that got the special series were the Wraith coupe and the Ghost saloon. The British automaker does not want to create the special variant for the larger Ghost or new Phantom. The carmaker has yet to make an official statement if there will be a special version for the upcoming Cullinan SUV.

Black Badge Market. According to a report by Road and Track, the average age of Rolls-Royce customers is 40 year. Considering the price tag and the lifestyle that comes with it, this is not surprising at all. However, considering that younger and younger millionaires and billionaires are popping up everywhere, the company heard the pleas of their young and hip market.

To be more precise, the company describes the market as "young men in a hurry." The BB aims to target a market of "ambitious, hedonistic egotists" that span from the late 20s to early 40s. However, it is still the company's interest to maintain offerings for their loyal older customers.

Available Colors. The new Wraith Black Badge apparently comes in any color, even white. However, the cars featured at the Las Vegas launch just so happened to be all dark.

The Wraith's ordinarily shiny chrome jewelry is replaced with a glossy black. Even the trademark "Parthenon" grille and the Spirit of Ecstasy mascot also get a glossy black finish. The bright border around the side windows remains the same, but Rolls will also make it black for customers who want it.

In addition, a new automatic gearbox was also added. This will eventually make its way to the entire Wraith lineup. The eight-speed automatic transmission remains the same but it did get a special Black Badge software mapping.

When the transmission is put into sport mode, the Rolls-Royce Wraith Black Badge will hold gears for longer. It will also downshift earlier and swap ratios faster than the original. This works hand in hand with a new throttle map which changes the speed and timing of gear shifts. The throttle map works according to how hard the car's driver pushes the pedal. In addition, the deliberate delay built into the standard Wraith is also removed.

The Wraiths air suspension has also undergone reconfiguration. The Black Badge series reacts to body movements faster and resists rolling more swiftly on turn-in to a corner. The front brake discs were also enlarged by an inch.

The nearly 2.5-tonne luxury car drives amazingly well. It is reportedly not a limited edition but will cost an extra $43,200 on top of the standard Wraith. However, this is probably just a change for any Rolls-Royce customer. The Rolls-Royce Wraith Black Badge is truly an impressive offering for the automaker's younger clientele. With the RR brand having such loyal customers, it was a good idea to start them young.