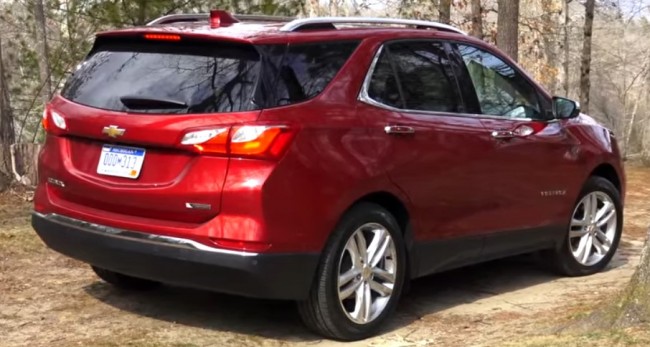 The 2018 Chevrolet Equinox gets a very promising redesign and will be a top competitor in the SUV market for this year. The new model is now lighter, roomier, and great handling.

The 2018 Chevrolet Equinox gets a very promising redesign and will be a top competitor in the SUV market for this year. The new model is now lighter, roomier, and great handling.

According to Auto Blog, the all-new 2018 model is a big step forward for the popular American crossover. Apart from its refreshed looks, it has also received significant tech and safety updates. It also has a trio of turbocharged engines under the hood.

The available engine choice is the one that has been seen testing and already at dealerships. It is a 1.5-liter turbo four-cylinder engine. It includes engine stop-start, a decent 26 mpg city and 32 mpg highway for front-wheel drive and around two mpg less for all-wheel drive.

The outgoing 2.4-liter 2017 model was only rated at 21 mpg city/31 mph highway for FWD and 20 mpg city/28 mpg highway for AWD. The new model is down 12 horsepower from the previous model but now has 31 more pound-feet of torque.

Chevy will also add two more engines later in the summer. The first is a 2.0-liter turbo which replaces the outgoing V6 engine. It will come with a nine-speed automatic transmission and will go up to 40 mpg highway. There will also be a 1.6-liter turbodiesel which won't come out until later but sounds very interesting.

In another report by Driving, the completely redesigned 2018 Chevrolet Equinox is the third-generation model of the SUV. It now returns to a shorter and stiffer platform and a new nine-speed automatic transmission on top of the three new engine choices. It is based on the same architectural underpinning as the Buick Envision, and as a consequence, it has shed 10% of its weight or roughly 400 pounds.

This lighter chassis gives the new Equinox an extra bonus with great torsional rigidity along with less flex. Overall, it will deliver a more stable ride. Its smaller body, shorter wheelbase, and the slightly lower ride will also greatly add to its stability. Also, aerodynamics will also improve.

Despite the Chevrolet SUV's seemingly compact size, the cabin is spacious and has a lot of useable space. The maximum cargo space is now increased up to 1,798 liters, inclusive of the hidden compartment beneath the trunk's floor. Premier models will have soft touch materials and leather as well.

There will be three trims - LS, LT, and Premier. Two packages - "Confidence & Convenience" and "True North" will be available on the LT and Premier. All of the trims are available in both FWD and AWD. The new packages will add 360-degree surround vision, forward collision alert, and low-speed automatic braking. A safety alert seat and lane departure warning will also be added.

The all-new 2018 Chevrolet Equinox is a very solid offering for this year. With its new engine choices, attractive exterior, and lighter chassis, a lot of people will be interested. Also, all of the added safety and tech features, coupled with the improved stability and aerodynamics make it all the sweeter. Top sellers like the Honda CR-V and Toyota RAV4 will see this new model as a competitor.