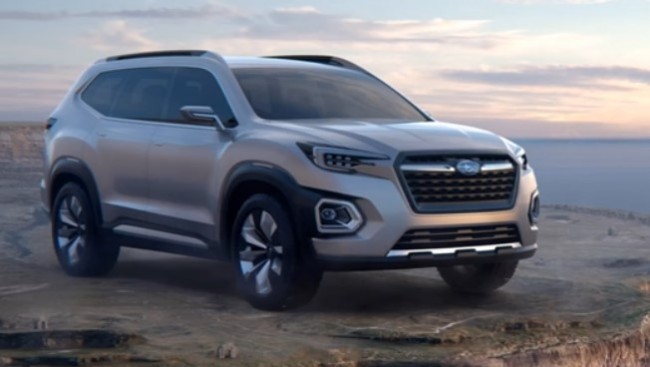 According to Motor Authority, the Subaru Tribeca was sold from 2006 until 2014. It was one of the oldest and least popular models in the carmaker's lineup for that year. In 2016, the Los Angeles auto show revealed the Viziv-7 concept car.

Early prototypes of the production model have already been spotted. It looks like a wagon and SUV hybrid. While Subaru has yet to confirm the name, the automaker hints that it will wear a badge that is synonymous to "outdoor adventure." Sources believe that "Ascent" is the most likely possibility since the automaker filed a trademark for the name last fall with the U.S. Patent and Trademark Office.

According to Car and Driver, the new SUV will be the carmaker's largest vehicle in its lineup. It will likely have three rows of seating and exterior dimensions similar to the Ford Explorer and Honda Pilot.

The 2018 Subaru Ascent will be the big brother of the Forester and Outback wagon. It will be the automaker's entry into the midsize SUV market. Ever since the Tribeca was discontinued, buyers of bigger SUVs had no more Subaru options and had to turn to other brands. Hopefully, this bigger offering will increase the carmaker's overall sales.

It will likely use the new scalable Global Platform that as seen in the 2017 Subaru Impreza. It will be expanded for the larger Ascent. The architecture is expected to incorporate a lot of high-strength and heavy-duty steel. The boxer engine will be mounted in the Ascent's nose for a lower center of gravity compared to most SUVs. This will be a plug for handling and crash performance.

The test mules were seen last year did not show anything out of the ordinary. It had swept-back headlights as well as hexagonal grille accents. It looked very similar to its Outback and Legacy siblings with curving peaks and flourishes similar to the new Impreza. From the beltline up, the Ascent look's very much like the Forester. Moreover, it was also reported that the Ascent won't be weird like the old Tribeca.

The 2018 Ascent is expected to have a 250 horsepower 2.0-liter flat-four engine similar to the one that powers the Forester 2.0 XT. It will likely have more horsepower though, considering the Ascent's large size. It is also possible that it may have a 3.6-liter flat six engine similar to the Outback and Legacy. It is, however, sure that it will come with a continuously variable automatic transmission and that all-wheel drive will likely be the standard.

The 2018 Subaru Ascent will likely debut at the New York auto show or sometime later this year. Pricing is expected to start at around $30,000 and could go up to the mid $40,000 range for the higher trims. This is in line with most of the other three-row crossovers in the market.

2018 Ford Fiesta ST is More Powerful Than Ever!