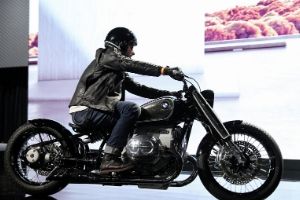 (Photo : Reuters Connect)
Retro is back with the BMW big boxer engine, that takes design cues from its design past. Bringing in the past styling combine with modern and sleek as a homage to the future.

Those who prefer the excitement of a two-wheel pocket rocket will look forward to this. Instead of going for modern styling, here is a look back to the bike designs of old. Expect great thing with the BMW Boxer engine, which is nothing short of beastly for a powerplant. The specs this motorcycle engine offers are output that is equal to a compact car. The specs of this motor are 1.8-liters with twin features in the R18/2 Concept, displayed at EICMA.

Engineered to have an output of 91 hp and 116 torque-pounds, this has 50-50 pulling and is very smooth. This design revival is different and offers more levels of excitement for the avid rider.

These engines have DNA for the first Motorrad boxer layouts that were first developed in 1923, for seventy years they were in production. Components on the engine are overhead valve drive, both the engine and drivetrain had different housing. Designed to be very reliable and easy to keep running, with good maintenance.

The big update for this boxer is air and oil-cooled to keep a constant working temperature. The mechanical part that moves the bike, the durable steel crankshaft with extra center bearings. It lessens vibrations of the crankshaft that leads to big engine cylinders. Another feature it has is split aluminum housing, as part of the engine. One feature that keeps everything all lubed up is the wet-sump lubing system. Cooling is done in this part of the engine with a dual-stage oil pump, using a sleeve type chain connect to the crankshaft.

All these parts work to drive the boxer type engine forward and at speed. Superior cooling features keep the engine from overheating, compare to other engine design on the market today. Fast acceleration with superior engine performance is what the newest boxer engine something to want.

Inspiration from the glorious past of BMW motorcycles are the derivatizes of these new motorcycle engine designs. Heritage designs from 2- cylinder engines from specific designs from 1936 to 1941, and 1950-51. Dominant features that made them distinct are two cam-driven cranks, propelled by sleeve type chains, above the crank positions. Benefits of this layout are shorted pushrods and less moving parts, which is better for the most part. These give better weight distribution when moving with exacting precision.

By going to old layout designs, BMW uses a dated yet effective and proven engine design. One unique aspect of the design is one screw and lock nut on each steel valve, that is rarely used now.

Other components are six-speed mesh gear, includes a reverse gear as optional add on for the trim. Instead of a chain-driven type, a propeller shaft or drive shaft is connected to the rear tire. Other small touches is a nickel- covered uni-directional joint which is reminiscent of the older legacy models. The BMW boxer engine is making a comeback.

Best cars to consider getting in 2020

Why 2018 BMW i8 Roadster Is The ‘Powerful And Unstoppable Icon Of A New Era...