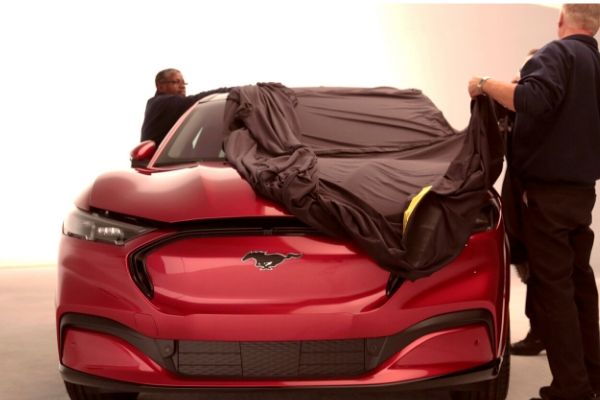 (Photo : Reuters Connect)
The legend of the Mustang is reborn and ready to rumble with the likes of the Mission-E or Tesla's Model Y. With the wraps pulled off to reveal a totally new Mustang that capitalizes on the SUV and crossover trend. This is Ford's answer to the consumer demand for more electric SUVs.

The legend of the Mustang is reborn and ready to rumble with the likes of the Mission-E or Tesla's Model Y. With the wraps pulled off to reveal a totally new Mustang that capitalizes on the SUV and crossover trend. This is Ford's answer to the consumer demand for more electric SUVs. Moving into the long-range electric vehicle niche that Tesla and other players are banking on to get more sales. Why settle for a small fry that are just sedans or smaller SUV-crossover configuration. Just go all out on this excellent e-SUV? Right.

One of the most distinct design changes is the Mustang-centric grill that came with earlier models. The iconic front end is distinct to its electric origins that is a visual trademark for next-gen EVs. The nose of the car retains the visual vestiges of Mustangs before it, and it carries the new design into the electric age. Why settle for most EV style grills without the vents? When conceptualizing the lines of the Mustang DNA right where it counts most! A truly smart and innovative take on how the next SUV hatches will be like. One word is genius and impressive that captures in one glimpse.

The next question is whether does it stack against Tesla well? New models are measured against the trendy electric startup. Chances are that the specifications of the Mustang Mach-E are not far from Teslas Model Y crossover or SUV? To succeed and leave the rest of the "Tesla Killer", Ford has to forge a new electric destiny for the Mustang and other Ford cars to follow.

Considering the reveal of the Tesla Roadster and the Tesla e-Pickup has magnified the public. So, can the E-Mustang that has technology and DNA carried over from its grand pappies with combustion engines. Inevitable is the rise of Ford's classics into the ranks of the EV era, not only just PHEV or hybrids.

Before the final reveal that confirmed everyone's speculation. The reborn Mustang Mach-E proved to be worth the wait. It looks sleek and capable for such a robust sports SUV hatch concept. Some nostalgia for the old grill might come into play though. Overall, the new e-SUV is bound to impress.

Getting one will cost $44,000 to $60,000 for the full trim. Far less than a Tesla for sure, with Ford tough touch. Compared to other cars in the same category will put on par with the Mercedes-Benz EQC, Jaguar I-Pace, with BMW-ish contours too. Just as good looking with posh and luxe touches to add!

Inside the interior is more with less with center console and dash LCD screen like an advanced bathtub! Creature comforts like extra space and headroom inside. It is not a big SUV, please take note. Other electronic touches and ports for devices are not forgotten too.

One step into the future with the Ford Mach-E. Galloping forward as the all-new Electric Mustang SUV continuing the legend into another age of motoring.