2017 Mazda CX-5 vs 2017 Honda CR-V: The High-Class Or The Functional Compact Crossover? See What Experts Say 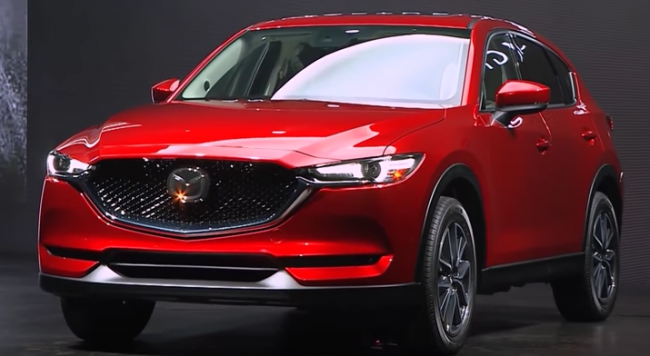 The 2017 Mazda CX-5 and the 2017 Honda CR-V surely stand out in the compact crossover segment following the explosion in popularity of this vehicle class. Although both are family-oriented crossovers, they clearly have a different focus toward target buyers. Let's check out how they stack up against each other based on expert opinion.

Exterior. Despite both vehicles having the same basic two-box shape, they clearly have taken a different route when it came down to exterior executions. The CR-V shares that new stylistic direction kicked off with the new Civic. Notice the flat wheel arches and funky shaping on the body with functional LED headlights and taillights. Plus, it boasts a sleeker chrome-decorated nose.

For the first time, Honda equipped the CR-V with a set of active shutters, tucked in the front grille, which should aid in fuel economy. And of course, this crossover has bigger dimensions compared with previous models. Thus, MotorTrend pointed out that designers might have done every trick in the book to shrink the visual mass of the vehicle.

Meanwhile, Mazda CX-5 is relatively a young model, first debuting in 2013. And yet again the Japanese automaker has crafted a new appearance despite getting a new look back in 2016 as it wants to rebrand itself as a premium Japanese automaker.

The 2017 CX-5 borrowed its looks from the CX-9 and is a modern-day marriage of sportiness and luxury thanks to Kodo, the company's new design language. You can easily notice strong character lines coming off the headlights and running above the front fenders and goes on to the taillights.

Interior and tech overview. The 2017 Mazda CX-5 clearly improved its interior with a more spacious rear seat that is optionally heated and air-con vents for keeping cool on hot summer days. Plus, Mazda's rebranding clearly screams the more premium vibe. The only thing missing when it comes to its tech is Apple CarPlay and Android Auto, which the company promises will arrive, eventually.

Meanwhile, the 2017 Honda CR-V offers plenty of storage cubbies and more USB slots. The interior has more emphasis on the functional than form. Also, there is an actual volume knob and an integrated Apple Car Play and Android Auto compatibility.

You can check out the video for a close look at each vehicle's interior. Also, you can head out to Mazda and Honda for a more detailed look at the interior and its tech. But clearly, it all boils down to your taste when it comes to comfort as both are offering superb quality and style.

Engine & MPG. Mazda and Honda use four-cylinder engines under the hood of both compact crossovers mated to an automatic transmission and offered in AWD systems. But similarities end there as each brand would boast each of their own tech to propel a unique driving character for each vehicle.

Mazda's standard engine is the slightly retuned version of the previous model, a 2.5-liter four-cylinder paired with the Japanese company's own SkyActiv-G. This is designed to improve fuel economy without dulling the driving experience, according to TopSpeed.

Mated to a six-speed automatic transmission, the engine delivers 187 horsepower and 185 lb-ft of torque. FWD comes standard, while i-ACTIV AWD system is optional. And the 2.0-liter will no longer be offered as the company is going diesel.

It has a combined fuel economy of 29mpg, with 26 mpg for city and 33mpg for highway. Overall, it has a far more aggressive engine and still retains that engaging driving experience we all know and adore.

On the other hand, the 2017 Honda CR-V offers two different engines. The base LX comes with a 2.4-liter inline-4 with 184 hp and 180 lb-ft of torque. Meanwhile, the EX, EXL and touring trims use the modified version of the Honda Civic's 1.5-liter turbocharged inline-4, delivering 190 hp and 179 lb-ft of torque.

Both engines are mated to a CDT and FWD come standard while AWD is optional. Fuel economy for the LX trim is 26mpg for city, 32 for highway, and 28 combined, while for the other trims, 28 for city, 34 for highway, and combined 30 mpg. By opting for an AWD, those numbers go down by 1 mpg for each category.

Driving-wise, the 2017 Honda CR-V is quieter and smoother. Basically, it is impressively well-rounded to drive.

Safety features. Since both are family-oriented crossovers, both, of course, offer a long list of safety features which are designed to keep your family safe. For the 2017 Mazda CX-5, 6 airbags, rearview camera, and a low-speed automatic braking system come as standard safety features. But you can get the i-ACTIVSENSE® safety suite offered for $625 which utilizes advanced tech such as milliware radars and cam for that 6th-sense feel for safety.

Verdict. Overall, both are very strong contenders in the compact crossover segment, offering high levels of safety features, fuel economy, drivetrain option, and comfort. But it is highly recommended that you get your own hands-on comparison to find out which fits better for your needs.

But as an overview, the best option for the family and everyone else onboard is the 2017 Honda CR-V, while the 2017 Mazda CX-5 is the best choice for the driver. These are both exciting choices but it is always up to you. Let's us know what you think.

Faraday Future Claims Nio EVE Is An Imitation Of The FF91: Could It Be?

First Volvo EV To Take Down Tesla Model 3, Chevrolet Bolt EV When It Comes To ...

2017 Alfa Romeo Giulia Quadrifoglio vs BMW M3: Experts Agreed The Giulia Has The...