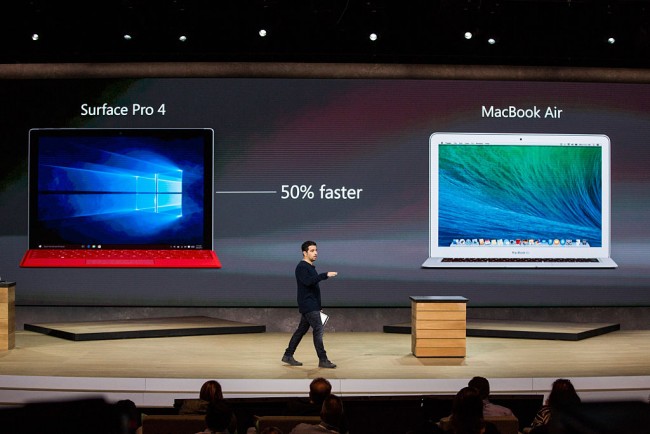 Apple might remove the headphone jack for the 2016 MacBook Pro. The latest report revealed that the company has been asking MacBook Pro users if they are using the feature.
(Photo : Andrew Burton/Getty Images)

For some time now, Microsoft's ad campaigns have been less about highlighting its own products, but rather, an avenue for downing others. It's something we've seen various times with the company's Surface ads, and now there's yet another.

This time around we see the Surface Pro 4 compared with a MacBook Air. Microsoft says the former is better than the latter because it has a pen, and a detachable keyboard, too. But the tone of the ad is just so assertive, it might actually border on being far too aggressive.

The concept of one-upmanship in advertising is relatively nothing new, but Microsoft has taken things to a whole new level, issuing new profundities. Their new ad, although informative in terms of their product, is a bit too biased, considering that it also featured the Macbook Air 13 and blatantly exposed the differences between the two products, with Microsoft heavily favoring theirs over the latter.

Microsoft's latest Surface Pro ad is just a tad too unfair, to begin with. Let's start with the obvious. In comparing the Surface Pro 4 and the MacBook Air 13, Microsoft is committing the cardinal sin of neglecting to compare like and like.

The MacBook Air is a laptop, while the Surface Pro is a hybrid tablet. One is designed to be typed on, the other has been particularly intended to be utilized as a touch-screen device. It's like saying a bowl is better than a plate because it can hold soup. Different instruments for different jobs.If Microsoft really wanted a comparison, it should have compared the Surface Book to the MacBook Pro.

Users could add a keyboard to the Surface Pro 4 to make it a dedicated productivity device, and this is exactly what Microsoft has done in the ad. Remember that the Surface Pro 4 does exclude a keyboard as standard. Thus, users would have to spend additional money on that in the event that you want to type on proper keys rather than an on-screen keyboard.

Microsoft has simply played themselves with this move. People are still waiting on Microsoft's response to this issue, but so far there have been none.

Nissan To Recall 134,000 Car Units Due To Potential Fire Hazard