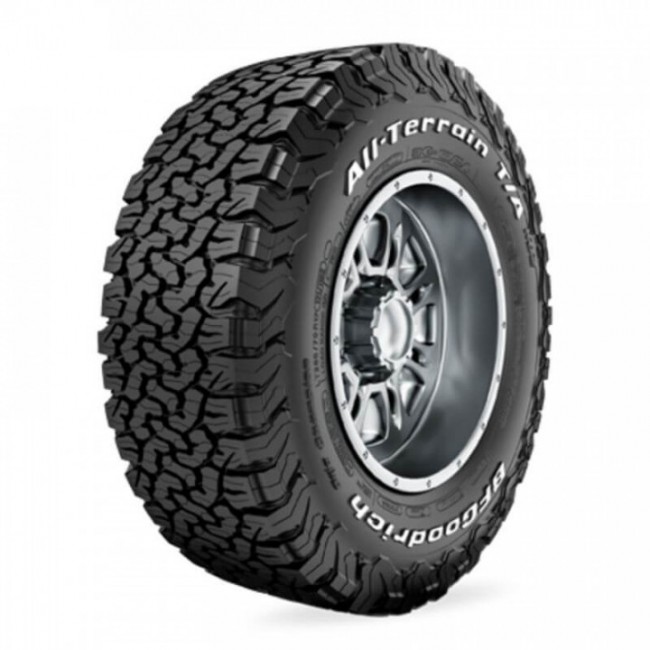 There are few American tire brands more well-known in the U.S. than BF Goodrich (now known as "BFGoodrich"). Originally a part of the Goodrich Corporation, the tire company was acquired in 1990 by French tire manufacturer Michelin, one of the world's largest makers of rubber tires. The raised-white-letter BFG logo on its products exists on many American cars, trucks, and SUVs. The company's history and where their tire comes from makes for a good tale.

Dr. Benjamin Franklin Goodrich first founded the tire company in 1870 as the B.F. Goodrich Company. This iconic American brand was one of the first rubber tire makers to be located west of the Appalachian Mountains. In 1869, Goodrich purchased the Akron, Ohio-based Hudson River Rubber Company and began his new company's existence first as a manufacturer of rubberized fire hoses.

As it continued to grow B.F. Goodrich branched out into the manufacture of a pneumatic or inflatable bicycle tire and then, in 1896, an inflatable automobile tire. It thus became the first American company to make such products for the newfangled motorcars, which were then making their way around on mostly unpaved American roads.

By the turn of the 20th Century, Dr. Goodrich's tire company was facing several competitors. Today, they all exist as either standalone companies or as conglomerates. Even today, Goodrich has always been at the leading edge of tire technology, and the company is known for extensive research and scientific testing. Henry Ford was so impressed with BF Goodrich and its product's ability to withstand wear he chose the company's tire for his new Model A in 1903.

For years, the Goodrich tire brand was a leader in American innovation, including in 1947, when the company introduced the first tubeless tire in the United States, a signal achievement at the time. With no need for an inner tube, a tire could be both more reliable, stable, and comfortable in ride quality.

Like its present corporate parent, BFG was also a pioneer of the radial tire in the U.S., first introducing it in 1965. Up until then, older style bias-ply tires had dominated the market. Radials provide both longer tread life and deal with road bumps more effectively, both qualities that help contribute to increased safety.

By 1988, though, BF Goodrich or the Goodrich Corporation had stopped making tires and subsequently sold the business and their name to Michelin. That company completed the sale in 1990 by purchasing both Goodrich and Uniroyal, one of its subsidiary brands. Both US tire brands are popular original equipment on many different domestically produced American cars, trucks, and SUVs.

In the 21st Century, Michelin North America, Inc., a part of the global Michelin empire, is responsible for producing the Goodrich tire brand in three different U.S. factories in Alabama and Indiana. All three facilities turn out many millions of Dr. Goodrich's visionary and innovative BFG products every year and they're sold as aftermarket offerings in more tire stores and retailers than can easily be counted.