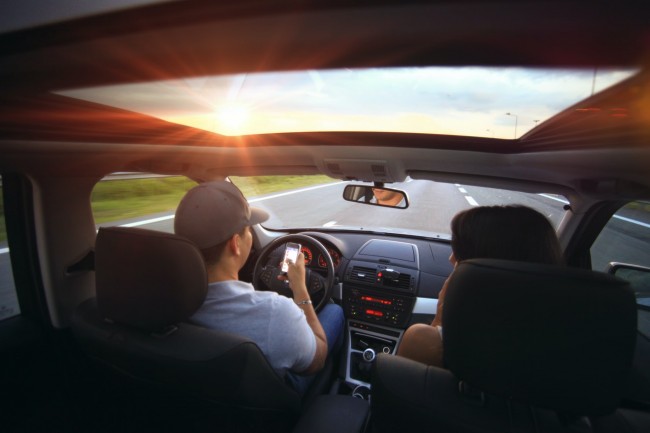 If you ask a decent number of people why they got in a car accident, many might admit that it happened when something distracted them. It happens pretty often. You might consider yourself to be a fantastic driver, but that doesn't mean you're immune to taking your eyes off the road.

When that happens, under ideal circumstances, you'll get away with it. You'll shift your attention back to the road in time to avoid any hazard that appears. Sometimes, though, your luck runs out, and that distraction causes a crash.

You want to avoid this if at all possible. With that in mind, let's look at some of the most common driver distractions. If you know that these are some of the top causes, then you can avoid a potentially disastrous collision.

Smartphones are a major distraction in your daily life, and not just when you're behind the wheel. We love our smartphones, and no wonder: they can do so many amazing things these days. You can use your smartphone to:

Of course, you shouldn't be doing any of those things while driving, but that doesn't prevent some people from trying it. Frankly, it's hubris in a lot of instances. The person thinks they're such a good driver that they can do multiple things at once.

Don't fall into this trap. You may be a great driver, but you need to keep your focus on the road. The conditions in front of you might change instantly.

You can't rely on your reflexes if the car in front of you suddenly brakes, and you happen to be playing Candy Crush at that moment. Leave your smartphone alone while you're driving, or you're tempting fate.

Undoubtedly, you love your children, and most of the time, they might be perfect angels. Still, it's the one time they act up in the car that might cause a crash. Perhaps your children are:

It's only natural to have rambunctious, inquisitive children. They're learning about the world, and they're probably finding that it's a scintillating place.

At the same time, you have to try and get through to them that distracting you while you're driving is dangerous. You might not want them playing video games all day, but that's a better alternative when you're in the car than demanding your attention.

When you're going for a drive, it's best if you have something to distract your child or children. That might be a smartphone, a book, a magazine, or an in-car entertainment system.

Whatever you choose, try to enforce in your child's mind that they can't distract you while you're driving. They need to entertain themselves until you get safely to your destination.

Strange as it may sound, music can also distract you in the car and cause a crash. There's nothing inherently wrong with listening to your favorite album while you're driving. It's a fun combination that almost every driver enjoys sometimes.

However, if you're headbanging along with some Metallica while you're blasting down the highway at eighty miles per hour, you can easily see how that's a poor idea. If you're the sort of person who gets heavily into their music while listening to it, you might remind yourself to take it easy while driving.

Also, you might wreck your car while trying to get your Bluetooth to work or find the perfect satellite radio station. If you're going to change your music, then wait until you're parked. If you attempt to make the switch while on the move, an accident might be the result.

Conversing with someone while driving can also distract you and cause an accident. That might be a passenger sitting right next to you or in the backseat. It may be someone you're speaking with via a Bluetooth smartphone call.

Some people can drive and talk at the same time with no problems. However, multiple studies have shown that if you're speaking to someone while driving, your reaction time is slower if the road conditions suddenly change.

If you're having an intense debate or arguing with someone while driving, that makes it more likely that you'll have an accident. Having an emotional conversation while operating a motor vehicle can spell disaster, so try to wait till you get to your destination to hash it out.

Some people love to multitask, and usually, there is nothing wrong with that. If you're at work, then you can save some real time that way.

If you're driving, that is not the time to fix your hair or lipstick in the rearview mirror. You might want to look your most fabulous when you arrive at your destination, but don't attempt to put the finishing touches on your look while driving.

You should also avoid flossing your teeth, blowing your nose, or any of the other strange things you occasionally see people doing while driving. Wait till you get to where you're going, or at the very least, make sure that you've stopped at a red light first.

Being Lost in Thought

One final thing that sometimes distracts drivers is simply thinking deeply about something. Maybe you have a situation at work or home that's taking up a lot of your mental energy. This is a time when many people have a lot on their minds, with Covid-19 running rampant, widespread job loss, etc

You can certainly think and drive, but don't let your thoughts overwhelm your sense of the moment. You need to see what's on the road ahead of you, and if you're concentrating more on other things, then that slows your reaction time.

Whenever you drive, you're doing more than getting from point A to point B. You're operating a multiple-thousand-pound vehicle, so make sure to stay focused. By doing so, you're keeping yourself and everyone around you safe.