6 Vehicles Driving the Future of Transportation 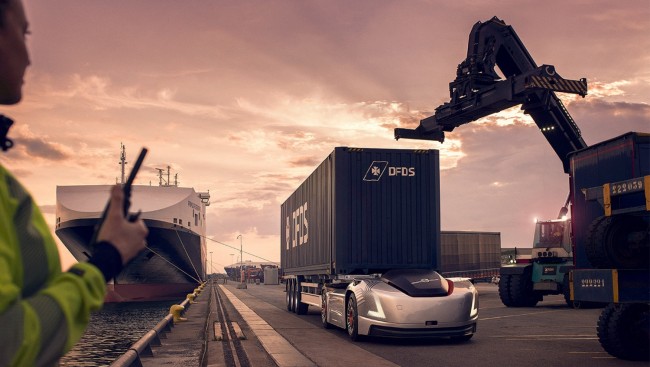 Connected, autonomous, electric - just a few years ago, these words would be used to describe the car of the future. Of course, that future is already here. The current auto market is home to a growing number of vehicles that use the internet, drive themselves and do it all without any internal combustion.

But the road to tomorrow isn't just for cars. From flying taxis to hyper trains and more, we look at 6 vehicles that are set to change how we get around.

While they've certainly come a long way, trucks still aren't particularly small or efficient. One of the main reasons for this is the need to accommodate a driver, which requires a large amount of space. It stands to reason that doing away with the human element would result in something much sleeker and lighter.

The folks at Volvo seem to agree. Their electric Vera truck looks more like a four-wheeled sled, comprised of little more than a low-profile body packing a drivetrain and battery, as well as a section for attaching trailers.

Unfortunately, the Vera is currently limited to a top speed of 25 mph, which confines it to ports and factories where it will be towing around cargo. This makes sense, considering that it's completely autonomous. Volvo wants to play it safe and work out the kinks before putting any of its electric sled-trucks on the highway.

In any case, the project is expected to come to fruition sometime in the next five years. The Vera will start performing short, repetitive journeys using its onboard cameras and 3D laser mapping technology. Longer, more complex routes will still be left to human drivers - at least for now.

Most of us don't give it much thought, but ships also use a great deal of resources to get around. Sails have for long been the eco-friendly alternative, but they're far from reliable. You're always at the mercy of the wind, which is why this catamaran has replaced its sails with 168 square-meters of solar panels hooked up to electric motors.

Known as the Energy Observer, the vessel is driven exclusively by its own power. This comes not only from a set of solar panels, but also wind turbines and a hydrogen fuel cell. In other words, it's powered by wind, water and sun. The floating laboratory is currently on a six-year voyage around the world, serving as a sort of clean-energy evangelist.

This 30-meter-long craft keeps a total of 126kWh in batteries at full charge, with 100kWh dedicated to the motors and the remainder for crew comfort features such as lighting, heating and kitchen appliances. It's capable of reaching a top speed of 11 knots per hour, which translates to a somewhat mediocre 12 miles per hour.

Granted, it primarily serves as a floating research center - speed has never been the priority. While the impressive technology powering the Energy Observer is promising for smaller crafts, it's unlikely to ever make its way into gas-guzzling container ships. Those behemoths will need to find alternative ways to generate sustainable power.

It has been a solid seven years since tech billionaire Elon Musk first mentioned the Hyperloop. If you're out of the loop, the transportation system in question is akin to a train-like tube that moves people and goods through underground tunnels at whopping speeds. Here are some interesting facts to get you up-to-date with the Hyperloop:

There are already several versions of the Hyperloop system. Each one is being developed by a different company. To add to the confusion, a number of countries are vying to be the first to implement the first working unit. The list currently includes India, Slovakia, Australia, Russia and the UAE. The last two nations are said to have the highest chance.

In the words of Elon Musk, you can think of the Hyperloop as a "cross between a Concorde, railgun and air hockey table." However you look at it, we can all agree that it's an exciting piece of engineering.

Ever find yourself stuck in traffic, wishing you could just jet your way over it all? If only you had a Cora. The electric flying taxi, which is yet to materialize in any usable form, is purported to facilitate autonomous flight for anyone who can afford it. This is made possible by a set of twelve lift fans, giving Cora the ability to get off the ground vertically.

Once you're in the air, a single propeller at the rear moves you forward while the plane-like wings keep you soaring swiftly around skyscrapers. Alright - so like most "flying cars" the Cora is basically a mix between a plane and a helicopter. But it's still a major step forward, especially considering the inclusion of driverless technology.

Kitty Hawk, the company behind the flying taxi, envisions a future where you can book the Cora like you would an Uber. As for when you'll be able to do it, regulatory approval and a working concept stand in the way.

The good news is that they aren't the only organization pushing for commercially-available ride-sharing. Uber themselves have partnered up with Bell, who makes the Nexus air taxi, to launch a similar service by 2023. Their vehicle features four seats and a pilot cockpit. You can read more about it here in this CES report on future transportation.

If this is a point of interest for you, be sure to check out AeroMobil's prototype for the flying car. Airbus Vahana is another big name here, as well as Volocopter 2X and Moog SureFly.

It may not win any awards for creative names, but the Future Bus is an impressive piece of transport that lives up to its title. The tristar-sporting bus is fitted with a myriad of tech that helps it drive itself while stopping to pick up and drop off passengers along the way. A powerful combination of cameras, radar and GPS systems make this possible.

There's more to it than that, though. The Mercedes-Benz Future Bus also has the ability to communicate with traffic lights and other infrastructure, which can help improve efficiency by identifying when lights are about to change. It can then slow down, for example, to save energy. The same measures make for a more comfortable passenger experience.

Test runs are already underway and the Future Bus has successfully navigated a 12-mile route in the Netherlands. But like any autonomous vehicle, it'll have to go through hundreds of thousands of miles of additional testing before being approved for production. Perhaps good things do come to those who wait.

Let's end things off with something a little more fun. It's also something you can already get your hands on - assuming you have a few million dollars to spare. Using three electric motors paired to a 3-cyl twin-turbo engine, this Swedish "Mega GT" is capable of reaching 62mph in just 1.9 seconds.

For context, a Ferrari 458 Italia takes 3.6 seconds to reach the same speed. Even the Bugatti Chiron is slower at 2.3 seconds. As if that wasn't insane enough, the Gemera has four seats, not to mention ample space for carry-on luggage and heated cup holders. Wireless phone charging and some futuristic infotainment systems are onboard as well.

Going back to that bonkers acceleration number, the time is made possible by 1,700 units of brake horsepower and 2,580lb ft of torque. A Lamborghini Aventador can only put down 509lb ft of torques to its wheels. And since the Gemera has electric motors, you can turn off the combustion engine and drive 31 miles on green power alone.

If you're worried about your safety, you'll be glad to know that the Gemera has you covered with a high-strength carbon fiber monocoque. Six "smart" airbags, traction control, stability control and a myriad of other advanced safety systems are onboard as well. There are even ISOFIX points for baby seats if you want to take your little ones along for the drive.

There's much to look forward to in the world of transport. The vehicles mentioned above make up only a fraction of what's currently out there. Innovation abounds in all areas of the automotive industry, as well as shipping, flight, logistics and beyond. Keep an eye out for what's yet to come.