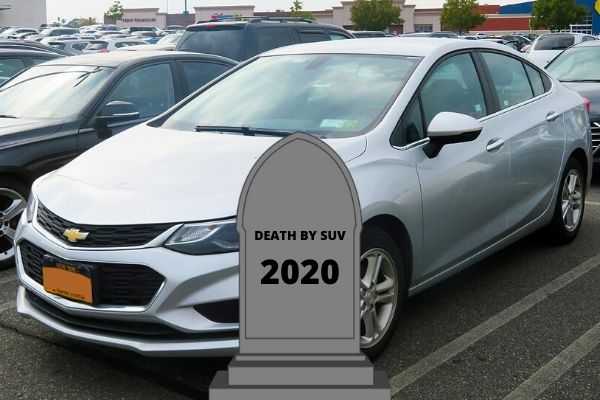 (Photo : upload.wikimedia.org)
Big American car companies that are culling their sedan lines should think twice because it might come back badly, for them.

A trend is ongoing and the slow whittling of American sedans are like culling the mainstay of carmakers for many years. Most car buyers till recently have bought more made in the USA SUVS, while their sedan lime was served to the chopping block. To the casual observer this seemed for carmakers, not so because the Japanese are sticking to their guns unlike the Yankees. Japanese car makers are producing excellent compact to mid-size sedans that are still bought by budget conscious consumers, while the Americans are retooling for SUV productions for more affluent buyers too.

It seems the Japanese are willing to bet everything by keeping sedan production because of a loyal customer base they already have. While the US carmakers are going lock, stock and barrel to produce SUVS or smaller crossovers for buyers who prefer SUVS. But, despite the SUV juggernaut in the US, there are still sales by Nippon carmakers. Even Tesla is ripping the EV market and earning more. All these indications show Japanese sedan still have a following with American buyers.

Americans buying Japanese sedans is not new and compared to the made in America cars, had better performance in several aspects. Once the US market got used to the overall quality of Japanese made cars, Detroit's big carmakers set out to make better sedans. This rivalry produced the great sedans of that became a top seller. Even gave the Japs a run for their money too, but as thing are now. Sedans that helped the American auto industry survive is killing their cars cow. One concern should be if all this focus on SUV will forever satisfy buyers?

Read: Sedans Are Not Dead Yet and Here Are Five Reasons To Prove It

It is a shame that buyers who raved on the most desired sedan, like the Chevy 2018 Cruz will have to say goodbye. Cars who get the consumers approval are now in danger of stopping production, all because of SUVS. Now, most buyers go for SUVS and topping the sales for most dealership prompting SUVS as the preferred car by dealers. In 2019 fewer sedans were sold, but Japanese sedans as still getting a profit too.

There are many best-selling sedans from Toyota, Nissan, and Honda especially, but despite more wanting SUVS there is a good number of sedan loyalists despite the lessening sedan sales. One factor that keeps the consumers coming is the better Japanese quality, cars like Accord, Camry are proof that buyers still want a sedan. Despite some success, not all-American carmakers have been able to outclass Jap carmakers.

Other arguments that should make American carmakers keep their sedans, is most buyers live in the city. Buyers in other countries still buy sedans because they are better for urban-sphere. While the buyer's option of SUV has parking and carbon emission problems. A Japanese sedan is likely to be bought, because of these reasons, that will push car buyers to decide.

If American sedans are going out, this leaves a hole for Japanese car brands to fill up. Though with only SUVS left in their lineups, this will a problem when buyers ditch SUVS. Overall, sedans will go on, but only the Japanese car badges only.

Related Article: Not all sedans are dead, just the American models