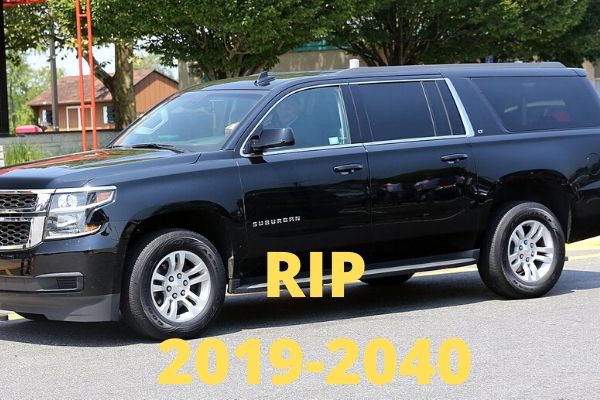 (Photo : upload.wikimedia.org)
SUVS rise and they will fall, 2019 was a great year but it will spell the end. SUV should be improved or dead as dinosaurs.

During the past year in 2019, the sale of SUVS has been astonishingly brisk while the sedan and their electric car progeny are barely holding up. One could call 2019 the year of the SUV and its smaller cousin the crossover. As of this writing, several companies have killed their lineups to concentrate on high ticket products like SUVS.

There is one key element that will kill the best-selling SUV, and it is staring carmakers in the face. Yes, more profits are earned to make more SUVS, but after that what happens next? Gets a simple answer, because the SUV is like a big dumb lunkhead compared to sedans cars getting smarter. With all the money earned from these high-ticket dinosaurs, other carmakers are moving to the future.

SUVS will soon be a heavy brick, literally because it is falling behind in technological developments driving companies out of the US market to get better. For now, the SUV is king but in 2020 and onwards it will be different. Even as Euro companies out more SUVS, Volkwagen and the gang are neck-deep in research, and acquiring tech from startups to put into their cars.

Compared to US carmakers that packing in large SUV with everything, except the kitchen sink. The real difference is that not everything is cutting edge, and retrofitting these obese cars will not work. Even SUVS that are reclassed as hybrids are not so attractive when put alongside their gas-guzzling brothers.

Read: These Automotive Trends Will Affect Car-Connectivity and How We View Cars, But Are We Ready?

Gas guzzling does not matter much since gas is cheaper now except if world prices rise then it will tell. Owners of SUVS are happy for the meantime, but the car that causes death and excessive carbon emissions for others. When the time comes these cars will not be a pleasure to own.

a. SUVS are top dog for now, but these heavy cars will be "dumb" bricks when increased car connectivity is the norm. Carmakers ploughing into the SUV industry will find it hard to retool them into smart cars. Smart cars have efficient motive systems and are from day one, are made to meld into the electronic environment.

b. Not all heavy hitters in the SUV industry want to make a full-electric car because they cannot. Tesla has beaten them to the punch and has the most charging networks in the US. Ford has promised an electric F-150, where is it? Car buyers want to switch, but it is not so affordable as of now.

c. In 2019, the e-Mustang is the only electric SUV to match with the Model X, nothing more follows. There are also less electric SUVS offered by more mainstream carmakers based in the US, most offering e-SUVS are smaller startups. This will be an Achilles Heel that will begin slowly, unless catching up is important not sales from buyers.

d. The biggest wallop that will bring down the SUV to its knees, it is unsustainability and fuel efficiency that is now screamed aloud. There is a drive by car buyers to have cars that expend fewer resources in other markets, but the big US brands are not listening. Soon, buyers will shun SUVS as the trend continues into 2040.

Will the big car badges, and other adopters of SUVS stop making them, and go to more efficient vehicles? Euro companies are racing to get connectivity and sustainability, while others are lagging. SUVS are big draws and no denying it. It will not last long and buyers are getting smart too.