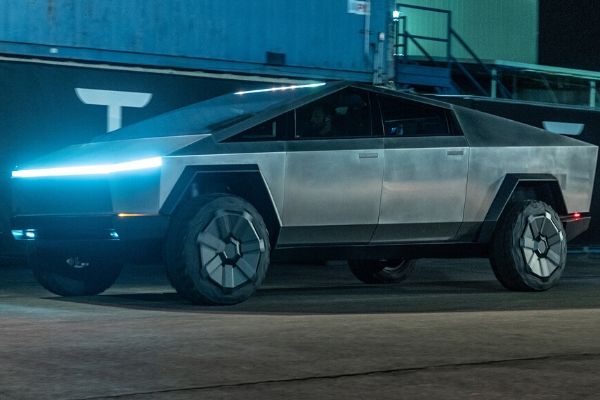 (Photo : Picture credit: www.teslarati.com)
The Tesla Cybertruck will have to beat its lineup mate, the Model X in four to one. To live up to the hopes of tesla's first e-Pickup or bust.

What comes next after the blitzkrieg courtesy of the Tesla Cybertruck, that even features super-strong glass for windows that had cracks. But, people do not care for the minor snafu, with the presence of Elon Musk which magnified his e-Pickup even more. Or is it that his Cybertruck just put him and Tesla in the spotlight for more raves? Incidentally, one of his mind's greatest creations is the Tesla Model X which wiped out a Ford-150 convincingly in a tug-of-war.

The Tesla Cybertruck should have been the one, but the e-Crossover stood in for the bigger brother and won easily too. A conundrum exists, and now the Cybertruck must do as good as the little sibling or else. The surprise is what comes to mind when an electric crossover like the Model X performed so well. Now, Tesla has a lot to live up to when the Cybertruck is ready, to deserve the compliments of the Model X and do four times better.

Not designed to take on the F-150, the Model X outgunned it in four aspects that the Cybertruck should do better in. Living up to the hype and doing better in four specs of performance that proves Tesla's dominance in the e-Pickup category coming soon will make it a must-have e-Pickup.

It should be blazing as the Model X when it comes to towing capacity, quicker electric drive motors, and a bigger truck layout to pack-in more batteries. This gives more range and power, even more, motor drives for faster acceleration. Get all-wheel-drive performance with the drive motors for better mobility, which should be included in the Cybertruck's bag of tricks. Last is carry more load on the truck bed which is what trucks are for, in this case, the e-Pickup will carry more than most trucks. Much more.

In a word, the Tesla e-pickup will do all these four aspects better.

a. Tow all you can and more

The Model X is fast but cannot tow, because of the layout as a crossover which is different from a pickup. But, the Tesla Cybertruck has the power to haul 14000 pounds and carry 3500 pounds more equipment without any difficulty compared to Model X. Most pickups can tow about 10000 pounds heavy, but Cybertruck is the hauling champ compared to the Model X.

b. Strong and robust parts for service

Tesla wants the Cybertruck to drive without a hitch, and parts that are few compared to a standard truck are less. It is important to have the parts heavy duty for hard and long use which is will be a good selling point for it. Model X is based on a car platform, but the Model X used a truck-based chassis for better toughness more than ever.

c. An off-roading truck that is can be modded

Tesla did not design it for out of the box off-road goodness, but it can tow, and load like crazy. It has a larger wheel well than the Model X to fit bigger tires instead. There is no limit to the customization to make it more capable than other trucks as an off-roader too. Model X is not as customizable, which is what makes them so different.

Everyone wants to outsell the Cybertruck, and the Rivian is $69,000 but Telsa quoted $40,000- $50,000 which is not final. No matter what, Tesla is aiming the Cybertruck for those who can spend for a top-notch e-Pickup. Pricing of the Model X is not relevant, because that is another market for Tesla to sell to.

No matter how it goes the fans of will love, Tesla's lineup that has it covered with the Model X (crossover) and Cybertruck (e-Pickup) in the up and coming e-SUV wars. All bets are in, a sure bet that Tesla will be the e-Vehicle maker to beat. Again.

Related Article:  The Four Must Haves For the Tesla "Cybertruck" All-Electric Pickup

Can You Pass up on the Lordstown Endurance Electric Truck with the Best E-Pickup...

Tesla Model X Did Not Just Win the Tug-of-war With Ford, It Was a Publicity Coup...