Tesla Model X Did Not Just Win the Tug-of-war With Ford, It Was a Publicity Coup D'état 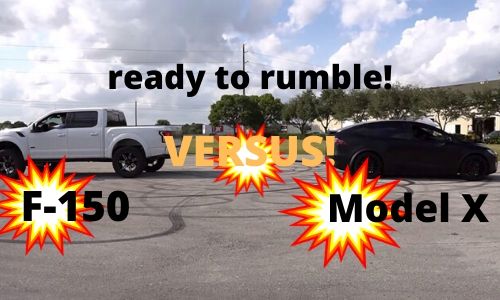 (Photo : newsdio.com)
The Tesla Model X painted a Ford F-I50 in a winner take all and proved supreme. It is all-electric by the way.

Fully electric Tesla easily made short work of the Ford F-150 in a winner takes all tug-o-war after Elon Musk's baby, the Model X, beat a full-powered F-150. On that day Ford lost more than it had gambled on as a fully-electric Tesla crossover wiped out one of the powerful trucks lined up under the Ford F-series. Anyone privy with F-series trucks knows they are powerhouses with their 4x4 driver trains and huge engines to boot.

Tesla fans rooted for their favorite carmaker, but to win when pitted against a bigger SUV just proves the technical supremacy of Tesla's engineering. In a word, this event sent shockwaves to the automotive community and sent a signal that conventional SUVs may be in for a competition. After all, experts do point out that SUVs are the world's most powerfully equipped cars. But, losing to an all-electric Tesla in what may have been a publicity stunt galvanized the truth about Tesla's releases all over the net. Most of Tesla's claims are not easily believable, except for perhaps their ability to build something that can go to the moon?

It seems the stunt did not go well for Ford. Most might have even expected the opposite result. Because of this fantastical result, feelers were being sent to Tesla for a re-match, saying there is a stark difference between an F-150 and a Cybertruck. One comment was noted to have underscored the fact that the Ford F-150 has a rear-driven-train, and the unsettling advantage it gave the Tesla crossover. Others pointed out that the Model X is much smaller than an F-150 and that diesel SUV has the most torque in the business.

Tesla, on the other hand, had the model X (100 D) set up as a crossover with two electric drive motors set as standard equipment. Electric cars do have high torque but this match just shows how much power an electric car has. For the Model X, it comes with two motors with output at 503 hp and 500 lb-ft torque, building an allegation of a set-up match. For all intents, these people believe the result of this Tesla-Ford face-off is basically just for show.

Comparatively, both the Model X and F-150 have more than enough torque to blow the other away. But, this time, the smaller Model X won and beat the much larger Ford truck. One argument is the Model X has better rubber for regular roads and the tires used by the truck is an all-terrain one.

Despite all these say-so's and that-is-not-its, the obvious is staring at the face of Ford. Tesla won, and it was not even their new and favored cybertruck that beat one supposedly high-powered Ford F. It should have been Elon Musk's e-Pickup but the stand-in, if a smaller crossover walloped the truck, asking for a rematch may be in order. Or not, but that is for another Tesla story.

The victor is the Model X and the losing Ford in the tug-of-war lost both prestige and reputation after it was crushed by an EV in a power race. This may or may not be a publicity stunt, but it will pull Tesla up and turn their cars into a must-have. Regardless of whether it was well-played publicity or not, Tesla did win the day for the electric vehicles.

How Will Nissan Titan Pickup Perform Well In The US? Brilliant Strategy Is In ...