Why Settle for a Dual Drive When a Quad Drive e-SUV Is Better, Says Porche 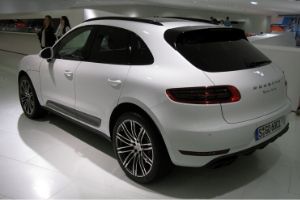 (Photo : upload.wikimedia.org)
Porsche gets a quad drive over a dual-drive, that gives this e-SUV that will have better performance.

After the successful unveiling of the Porsche Taycan, here is another bombshell to hit the e-Mustang and the Tesla Model Y. Yes, this is big - as in four times bigger - and is guaranteed to impress even non-EV fans. The big news after the Taycan has taken many by surprise: Porsche is on overdrive with a quad drive e-SUV, as opposed to the Taycan which features a three-motor-drive variant. This time with all-hold ripped of the hinges, Porsche has managed to develope quad-drive motors for each tire.

Porsche's newest development is an e-SUV with four motor-drives strapped to each tire. How good is that? For one, this rewrites how EVs are made, which is usually limited to a dual drive at most. But, the German automaker went on long one, decided to add this improvement to their e-SUV line, thereby upping the ante for their rivals in the industry. For the fans of Porsche in the US, this is prime SUV real estate to be had. Chances are that it will be like the Taycan or Mission-E, with more inquiries and reservations to add to their model lineup.

The next question is why the brainiacs at Porsche think of pulling this off. It is a pretty extreme layout for the electro-powertrain SUVS which is, at best, on a 4x4 drive that gets gripping and tracking on all tires, all at the same time. It is why SUVS are desired despite its shortcoming. For electric SUVs, this means getting the same amount of traction with sports-car handling in a slightly bigger-than-sports-car design, allowing control on icy roads and better control when on curved roads, and resulting in less incidence of over or understeer with better handling.

Japanese carmakers have presented a similar layout for their e-SUVS, but nothing about tests conducted on them. Compared to these Japanese manufacturers, the boys at Porsche have done their homework. With proof of their supremacy in the race, Porsche is believed to have a Macan EV or another one already in the actual development and testing stages, thrusting them to dominance in the aggressive EV race. By blasting the public with teasers and actual cars, Porsche is all set to impress with their Tesla buster-ish cars in the making.

Efficiency is the key, and these German bright sparks enable their system without extra sensors to distribute traction. Instead, it uses advanced software that is better, because it controls the drive motors with utmost precision. Forget the limited-slip differentials in older cars, this system is program-based and tested for quite some time.

Surely, a quad motor SUV that will challenge even Ford's e-Mustang for dominance will pique the interest of those looking for high performance cars? For now, the Macan EV (Me can?) will get the quad drive motor system. Though it is an entry-level option, that might be followed by a Cayenne variant or another design which should make waves in the car industry soon.