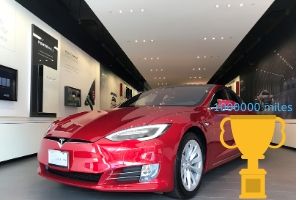 (Photo : Reuters Connect)
The first reported Tesla S has reached 1 million kilometers and going! It proves that Tesla’s tech is more than up to par.

Tesla electric cars are spearheading the drive to improve the quality of electric cars. Unfortunately, the momentum gained by more Teslas sold has led some think tanks to question the EVs ability to reach more than 300,000 miles! Questions about the actual capacity of the power packs, prompted more advanced battery packs for EV.

Common problems like battery degradation from extreme temperatures,  and repeated charging of the power cell that shortens its life remained unanswered for a long time until now as the first Tesla Model S was tested to hit the 1,000,000-mile benchmark. Coincidentally, this jives in with the EUs requirements which requires EVs to reach a certain standard or be penalized otherwise.

The first Model S to reach an extreme distance has been achieved and is making waves. This was done by driving about 600 km per day, to reach the 1 million mark end goal. Another car, a Tesla Roadster is just 400,000 miles shy of the 1,000,000 miles target. Reaching this goal proves that electrics are the ones to beat, except when the Taycan gets to join the party.

Most Teslas racking up on the miles are working fine, except for some problems with their drive units. These are repaired later on, and are now back to the usual daily racking of the miles. For the Model S in question, which had two battery packs changes and three drive units were replaced. An indication that it gets as much maintenance and repair as a conventional car. This particular Model 3 and Roadster are the ones with the most extreme mileage yet to date.

Against all expectations, the battery pack is now hitting the 310,000 miles. Best news and proving that excessive battery charging wear and tear does not mean total battery degradation. The amazing performance of the latest drive unit installed in an early Model S is evidence of improved performance. If all falls into place, consequent changes made will push the mileage into the 1 million mile-stretch for the Model S.

Tesla car owners would be glad to know, that Hansjörg Gemmingen car had everything under warranty. Less repair and maintenance costs, when it reached 1 million kilometers. That was only for the cars other parts, not the tires. Proof now exists of the reliability of electric vehicles, as based on the Model S and Roadster performance.

Several premises made by Elon Musk are a cardinal truth, which are these statements.
a) A Tesla Model 3 will last till 300,000 miles.
b) Expect the newest battery pack to last 1 million miles, out by next year.
C) One Model 3 is pushing past 100,000 miles.

This is only the first Model S to get to 1 million kilometers, this is not the last as Tesla technology gets more refined for better performance. Are you ready to shell out the money and get one, after this? More is coming and Tesla EVS will get sharper than ever.

A 2008 Tesla Roadster Prototype That Costs A Million, Which Makes US Wonder If ...