LA Auto Show 2019 Features Sedans Alive and Kicking, Not Quite the Dead Most People Think 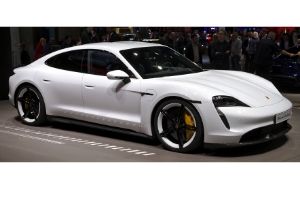 (Photo : upload.wikimedia.org)
Are we sure that the sedan is breathing it's last? In the LA Auto Show 2019, there is still more life to the venerable sedan. Despite the onslaught of newer SUVS and even e-SUVS, the sedan is still alive and kicking.

Are we sure that the sedan is breathing it's last? In the LA Auto Show 2019, it seems that there is still life to the venerable sedan. Despite the onslaught of newer SUVs and e-SUVs, the sedan is still alive and kicking. Other carmakers beg to disagree and are only too eager to show why consumers still have confidence in the regular sedan.

The urgency to keep sedan lineups afloat instead of being eaten alive prompts car makers with a sedan line to work hard and counter the fact that they are getting less of the US market. So far, sales have been slow as more opt for the roomy SUVs. Even Tesla is affected by this particular preference transition from the compact to the large SUVs, over all sorts of sedans. Even in showrooms, more SUVs and crossovers are also being sold.

Most of them, in an effort to boost sales, have gone for radical makeovers and even more premium trim than the standard. But, the industry is moving ahead a bit too much. All the sedans on the showroom floor are not the sedans of yesterday. Touches here and there are made to add more functions. There is more than one carmaker who is willing to prove that SUVS are not the end-all and be all, and the sedan is yet to reach the end of the road.

Case#1
More sedans are equipped to be an all-wheel drive as the standard ones. Usually this trim is an extra expense for the buyer. Carmakers realized that by equipping them with AWD which makes for improved safety and better handling. The Toyota Camry and other more progressive brands are hedging their bets on this. SUVS or crossovers are usually the ones to get this.

Case#2
Tesla's Model 3 is a top-seller in the electric vehicle market. Because of Tesla's efforts, the EV has become highly in-demand. As a result, more EV sedans are going on sale from 2020 onwards. More EVs are also set to invade the market with more options for the consumers to choose from.

Case#3
The unveiling of the Porsche Taycan or the Mission-E as the premier electric sports sedan is a landmark for the electric vehicles industry. Being compared to the Tesla Model S is inevitable, but the Taycan is coined as a luxury sports EV. Not only are all the features premium, but it also comes with a high kilowatt output battery with 250+ miles range and fast acceleration. Several models are available in different trims and performance values. Wraps coming off at the LA Motor Show emphasized that sedans are still gunning for its share of the market!

Case#4
Fords Mustang Mach-E is called an SUV. But, the sweeping hatchback is a descendant of the Mustang sedan of old. Though tagged as an e-SUV, the sedan lineage continues as an electrified car. It is the same as the Taycan in terms of the 200-300 miles range, though loosely based on a sedan layout with its bumped up size which almost looks like an Escape SUV. The giveaway is the new nose and elongated hood that keeps the signature sedan style.

Case#5
Last is the Toyota Mirai which is a hydrogen fuel cell car. Has 400-mile range which is more than most e-SUVS. This sedan is at the leading edge when it comes to new energy vehicles.

Conclusion
One look at all these sedans at the LA Auto Show 2019, it is easy, even for the unbelievers to realized that contrary to the popular belief, sedans are not dying, but are alive and kicking to this day.