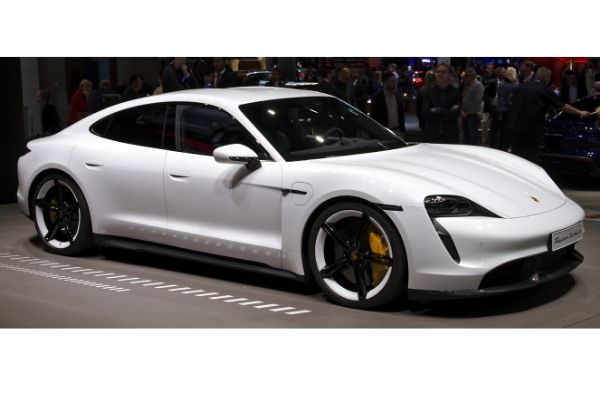 (Photo : upload.wikimedia.org)
In the 2019 LA Auto Show, Porsche is unveiling a group of cars that included the much-hyped Taycan 4S and the Macan Turbo, and the 99X electric. These cars represent the current trend toward electrification, more crossovers, and SUV models

In the 2019 LA Auto Show, Porsche is unveiling a group of cars that included the much-hyped Taycan 4S and the Macan Turbo, and the 99X electric. These cars represent the current trend toward electrification, more crossovers, and SUV models. The real star is the performance electric sports sedan for the luxury bracket, which is a spotlight on the Taycan 4S.

According to a Porsche AG executive, the introduction of the new 911 was in LA. This year the Taycan is hitting the floors once again. Previously called the Mission E, then Taycan later on. The German carmaker is pushing the pedal into a new niche. Incepting into luxury sports EV sedan niche, which is a similar move by luxe euro carmakers who moved into the exclusive luxe SUV niche. Noting that the US market has the most 911 devotees in California. With Taycan that continues the electric DNA into the future.

What makes the Taycan 4S different is what it offers to the future of cars that Porsche offers into the future. It even keeps the four-door sedan layout, despite others going for crossovers and SUVS. Taycan is the bleeding edge of the integration with new technologies shaping cars. Connectivity, digitization, and new ways of production.

What is under the hood? None, but the Taycan 4S will get two electric battery options. Along with the Taycan Turbo and Taycan Turbo S, the Taycan 4S has expanded the lineup further. Performance battery has 390 kWh or 530 ps output. Get the performance battery plus, and it shoots to 420 kWh and 571 ps of electric over boosting. It will be the premier EV sports sedan that will represent Porsche's initial foray into a newer US market. Along with it, there are its siblings like the Macan Turbo, and the Porche 99X Electric. The 99X is the first EV racing car to grace the LA Auto Show.

The sports EV reaches 100 km/h in 4.0 seconds flat. The top speed is 250 km/h with a cruising range of 407 to 463 kilometers depending on the battery (WLTP). Peak charge for it is 225 kWh and 270 kWh for the higher-spec battery. Astride the rear axle of the 4S is a synchronous motor, that drives pushes it forward fast. AWD is natural, with two motors on the front and rear axles is normal. All Taycans have 2-speed electric drivetrains. Factor in energy efficiency, with better airflow that increases range.

Introducing the new Macan Turbo with six-cylinder 2.9-liter that has 440 ps output.
A compact SUV that will zip to 100 mph in 4.3 seconds, a top speed of 270 km/h! facelifts and upgrades are all over this SUV. Another one is the Porsche 99X electric that is an all-electric Formula E racing car. Developing this for motorsports and the FIA Formula E Championship. Which is part of Porsche's Mission E drive to get better EVs soon.

Presence of the Porsche's Taycan 4S, Macan Turbo, and 99X Electric show how serious this carmaker is. The 2019 LA Auto Show will be where everything gets into overdrive for Porsche.