Will the all-new Ford Bronco return with a Removable Roll Cage? 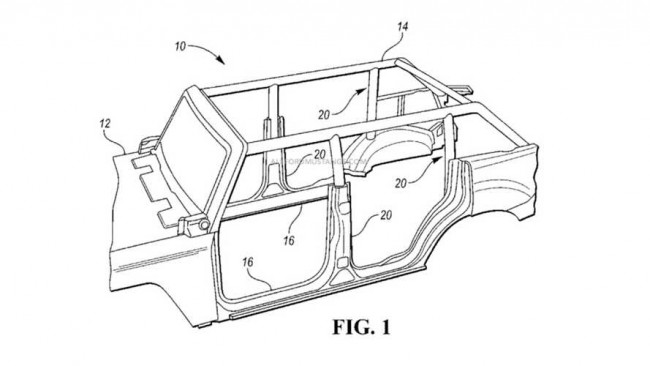 For those old enough to recall, this was Ford's off-roader back in the 1960s all the way to the 1980s. It was tough yet civilized enough to become a daily driver in the city.

And it came way before the Sport Utility Vehicle term was coined.

Fast-forward to 2019 and we have all sorts of SUVs roaming our roads.

Yet one of the most eagerly-anticipated comebacks is arguably that of the legendary Bronco.

Ever since news of the Ford off-roader came out more than a few years ago, everyone has been talking about it, speculating what it will have to offer.

Will it have the same rugged and capable chassis? Or will Ford water it down and simply use the name for marketing purposes?

While Ford has not exactly givein us any details, a news article by Auto Guide did show a photo and some juicy bits about a patent filed for Ford for a removable roll cage for the upcoming Bronco.

A close look at the photo reveals the B- and C-pillars will be easily detachable for that open-air feeling. This is a throwback to the 1960s Bronco which had the same feature.

This is a great amenity, especially for customers pining for the good old days when the Bronco was King. Yet it does beg one very important question:

Safety. More specifically, how will this affect occupant protection?

Having a removable roof and pillars back in the day was considered cool. This allowed passengers to experience a feeling of freedom, being able to soak up the great outdoors.

This is where the majority of these rigs roamed during their heyday. Yet keep in mind that this was the time when safety was not really much of an issue. Steering wheels and dashboards were hard and seatbelts were mostly of the lap belt variety.

If they were installed at all.

Nowadays, however, everyone is harping about how safe a vehicle should be. We have airbags galore, driver aids that supposedly help drivers stay alert, and more rigid vehicle structures.  In fact, it has been said that accidents nowadays usually occur because of driver error.

As for the Bronco, we're not sure if the removable pillar will pass the keen eyes of the safety police.

And then there is the issue of where to place the seatbelts. With most belts being anchored on these pillars, one wonders where these will be positioned should the feature go into production.

The patent photo does reveal a smaller pillar that will house the seatbelts, ensuring that occupants will still be kept in place even if they get to enjoy the sun and the scenery.

Of course, all this is mere talk. A lot still has to be revealed about the upcoming Bronco.

But until that happens, the build up to the actual launch date is only fueling the excitement. This is especially true for those old enough to remember the original version.

Expect to see the all-new Ford Bronco at the 2020 Los Angeles Auto Show late next year. We're just hoping it will be worth the  long wait.

Do Not Waste Your Coffee Grounds, It Is a Car in the Making!

Ford Extravaganza for the SEMA 2019: On Display Customize SUVs from Escape, ...

Why 2018 Ford Expedition Is Your All-Around Complete SUV