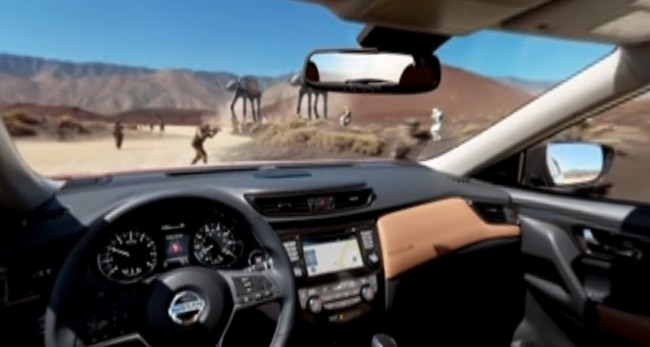 The Nissan Rogue has been all about "Rogue One: A Star Wars Story." Most recently, the Japanese automaker was able to convince Lucasfilm to make a two-minute 360-degree video advertisement.

The Nissan Rogue has been all about "Rogue One: A Star Wars Story." Most recently, the Japanese automaker was able to convince Lucasfilm to make a two-minute 360-degree video advertisement.

When the title was revealed, the Japanese automaker was quick to get as much Star Wars-related publicity as possible. Nissan USA released a total of 5,000 limited edition 2017 Rogues last year that had a starting MSRP of $28,950. It comes with a limited edition Death Trooper replica helmet produced by Gentle Giant Ltd. and is exclusive to owners of the 2017 Nissan Rogue: Rogue One Star Wars Limited Edition.

For some, it may seem excessive, but for the ultimate Star Wars fan, why not? The SUV also comes with special black 17" aluminum-alloy wheels, a limited edition badge on its front-row doors, and a special black front grille with a front lower finisher. There is also Star Wars logo illuminated kick plates, limited edition logo carpeted floor mats, and rebel alliance and galactic empire logo cup holder inserts as well.

Most recently, Nissan was able to get Lucasfilm on board with making a two-minute VR video ad that highlights the Rogue's safety features. According to a report by PC Mag, after a lot of prodding on the part of the Japanese automaker, the first Star Wars-themed car advertisement for VR was made!

The video is a simple 360-degree video that is available now on the Oculus Rift, HTC Vive, and Samsung Gear VR. A female voice narrates what's going on and there are battle scenes from the Rogue's driver seat. Eventually, there is an airstrip where Rogue One's K-2SO trips the pedestrian detection. Alan Tudyk says "congratulations" mockingly and the droid peers through the windshield.

According to another report by Inside the Magic, it was amazing how the ad only took a few months to make. Ordinarily, something of this scale could take years to make, but Nissan was quick to act to ride the "Rogue One" train to success all the way until Episode VIII.

The Japanese automaker wanted to showcase the many safety features available for the Nissan Rogue. It has Blind Spot Warning, Forward Emergency Braking with Pedestrian Detection, and Around View Monitor with Moving Object Detection. Unfortunately, it does not have a built-in hyperdrive or a place to put your droid.

The VR video begins outside the vehicle. The viewers are thrust into a battle between Stormtroopers and Rebels. The ad was shot with the most advanced VR cameras currently available, offering a high degree of photorealism. To make it as authentic as possible, it was shot across Mohave Desert dunes, only minutes away from where the original "Return of the Jedi" was filmed!

In other related news, the Rogue will get a Rogue Sport later this year. It will be a smaller and sportier version of the popular SUV.

Nissan Rogue X-Wing At The Not So Far, Far Away Chicago Auto Show