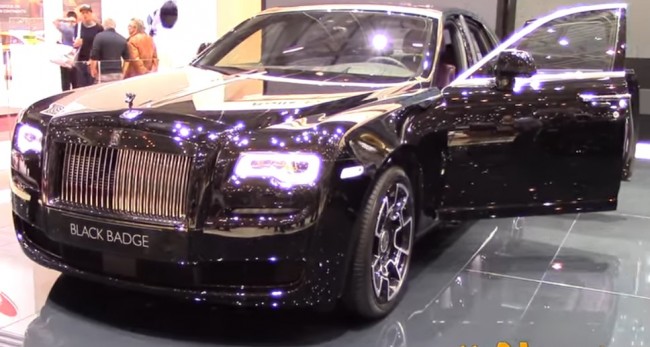 The Rolls-Royce Ghost Black Badge was first unveiled at the 2016 Geneva Auto Show. It was intended for "young, self-made people that make a bold and edgy lifestyle statement about their lives."

The Rolls-Royce Ghost Black Badge was first unveiled at the 2016 Geneva Auto Show. It was intended for "young, self-made people that make a bold and edgy lifestyle statement about their lives."

In the past, a Rolls-Royce was an executive car for a very rich but older clientele. This is no longer the case for the BB series. According to a report by Men's Journal, the Rolls-Royce Black Badge lineup was inspired by the unlikeliest of muses. They wanted to use late, great, and larger-than-life Rolls owners who were notorious for living life on the edge.

Keith Moon, the legendary drummer of The Who, was a Rolls owner. He liked to throw TVs out of his hotel room window. Another inspiration was Yves Saint-Laurent, the noted designer who shocked the fashion world with his bold creations, made a tuxedo for women. There is also Mohammed Ali, who was a symbol for anti-establishment. And finally, there was Charles Rolls himself who was a racer and aviator and Britain's first aviation casualty. He actually crashed his Wright Flier.

The Black Badge series has several modifications that give it something edgier and meaner than any other Rolls-Royce on the market. As the name would suggest, it has a noir-themed exterior and interior. Even the shiny bits in the wheels, badging, and the Spirit of Ecstasy figurine are all blacked out.

The Rolls-Royce Ghost Black Badge is actually the iconic luxury brand's "entry-level" luxury sedan. With a base price at over $250,000, this entry level is priced with the Bentley Flying Spur, Mercedes-Maybach S-Class, and the Aston Martin Rapide. The Ghost sets itself apart from being a traditional luxury car that is designed for both their drivers and their passengers.

In another report by The Car Connection, the Ghost has a powerful 6.6-liter twin-turbocharged V-12 engine with an eight-speed automatic transmission. It delivers 563 horsepower and 575 pound-feet of torque. Despite weighing over 5,500 pounds, the Black Badge Ghost accelerates effortlessly and quietly from 0 to 60 mph in only 4.8 seconds.

It also has a wide array of safety and tech features. It has a wi-fi hotspot, a Bespoke Audio System that claims to be the "most exhaustively engineered and finest audio system in automotive history," and even a night vision camera. It also has a Driver Assistance package that has adaptive cruise control, high-beam assist, heads-up display, and a lane departure system. The night vision camera can detect pedestrians and animals up to 300 yards away with the infrared technology.

The Rolls-Royce Ghost is also highly customizable. Customers can even make theirs one of a kind with 61 exterior colors (in either solid or two-tone) to choose from, 10 wheel styles and sizes, and five different Spirit of Ecstasy hood emblems to choose from. They can even customize the interior leather with 19 different color choices, 18 seat piping colors, 32 seat stitching colors, 19 headrest monogram choices, and 11 veneer styles. The steering wheel also comes in 13 different colors and there are still other choices such as the headrest embroidery, seat pillow embroidery, and indoor car cover colors and embroidery.

The Rolls-Royce Ghost Black Badge is truly something else. It is luxurious, powerful, blacker, and meaner. It is perfect for the new breed of young, hip, and rich clientele that the automaker hopes to cater to.


See Now: OnePlus 6: How Different Will It Be From OnePlus 5?

The McLaren 720S: Built for Speed; Completely Outshines the First-Generation ...

The 2017 Tokyo Motor Show Will Bring Back A Lot of Legendary Sports Cars!