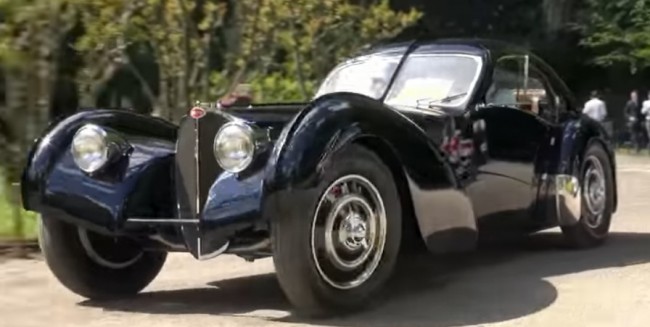 According to a report by Jalopnik, Ralph Lauren's 1938 model won the Concorso d'Eleganze Villa d'Este in 2013. This event is an elegance competition for both classic and vintage cars. It takes place every last weekend of April at the Villa d'Este on the shores of Lake Como, Italy.

The Atlantic is a beautiful car, but many would argue that it is not "$40 million beautiful." While this is true, the value is brought about not only by its beauty but also by its exclusivity. Remember, there are only two like it in the world.

However, according to the same report, this black Bugatti is worth every penny. This is because the Atlantic is not just a car, it is apparently a "monument to pre-war Europe."

It is one of the last great things that humanity produced before everyone had to focus on building tanks. It was the pinnacle of the Bugatti family's contribution to both the automotive industry and the twentieth century. It is such a significant piece of history, but also a ghost that cannot be touched.

In another report by Supercars, the Bugatti Type 57SC Atlantic is elusive and expensive and the very first supercar ever made. The Bugatti beauty has a low stance, lightweight construction, and a powerful engine. It has a top speed of 123 mph and a gorgeous and striking teardrop body.

The engineering on these pair of Atlantics was similar to the other Type 57s. These formed a basis for Bugatti competition and grand touring models. Chassis arrangements included Rudge Whitworth wire wheels, fifteen-inch drum brakes and a strong, complex De Rams shocks absorbers and an uncluttered chassis. The Type 57SC chassis uses a combination of the supercharged 57C engine with the low and short 57S racing chassis.

Jean Bugatti, Ettore's son, played a large role in the development of the 57 series. He styled the Atlantic. He made sure to draw an interesting fusion with its Avant Garde tear-drop shape and its aircraft styling. Its heavily raked windscreen, kidney-shape doors, and riveted fins are also part of what makes it so remarkable.

The 1936 model is at the Mullin Automotive Museum in California. It was first delivered to Lord Victor Rothschild in England. In 1941, it was sold to Mr. T.P. Tunnard Moore after Rothschild had Bugatti install a Roots supercharger. After some time, it eventually made its way back to the United States. Eventually, the car was sold for $40 million to a generous family who loaned the car to the Museum.

The 1938 model belongs to Ralph Lauren. It has a number plate and sounds divine! While Ralph Lauren could sell it for a massive profit, he chooses not to because the machine is worth much more than money.

The Bugatti Type 57SC Atlantic is a beautiful and expensive car which is probably worth more than $40 million now. It was the very first supercar and history on wheels.