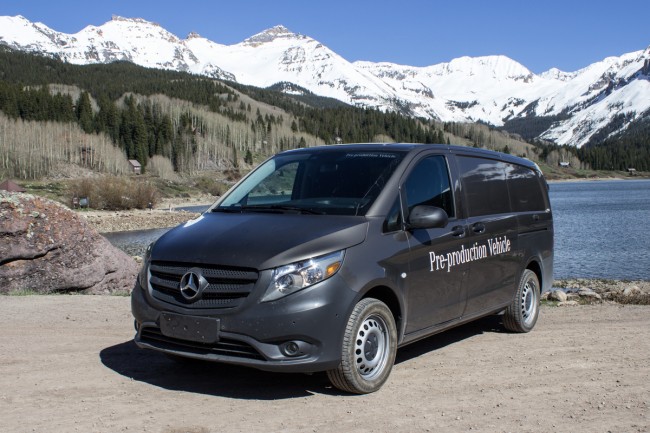 At a moment in automotive history when automakers are abandoning minivans for crossovers and sport-utility vehicles, leave it to Mercedes-Benz to reset the trend and reintroduce the traditional minivan.

Meet the 2016 Mercedes-Benz Metris, a van that's closer in size to a Dodge Grand Caravan than it is to a full-size Sprinter, but shares just as much DNA with Mercedes-Benz products. Designed to give the brand a foothold in a commercial segment quickly filling with Continental entries, the Metris is essentially Europe's popular Vito van homologated for North America.

We spent several hours driving the Metris in the mountains of Colorado, ahead of a full media evaluation.

Smaller than a Sprinter, yet larger than most midsize commercial vans, the Metris is essentially a minivan. It occupies about the same footprint as the aforementioned Grand Caravan and its soon-to-be-replaced sibling, the Ram C/V. When it arrives this fall in North America, the Metris will be available as either a cargo van or a passenger van, following the lead of the Ford Transit Connect and others. Mercedes-Benz is betting that the Metris will add to its van portfolio in a significant way, and—unlike the Sprinter—will arrive only wearing the three-pointed star, and not the Freightliner badge. (A percentage of Sprinter vans are sold as Freightliners.)

The rear-wheel-drive Metris has a fairly conventional, two-box shape reminiscent of traditional American minivan, but seeks to avoid the fate of the unloved Ford Aerostar and inefficient Chevrolet Astro/GMC Safari vans. Although the van is also available with front-wheel drive in other markets, Mercedes-Benz chose to route power from a 2.0-liter, 208-hp turbocharged four-cylinder engine and 7-speed automatic transmission through the rear wheels in North America. All-wheel drive is a possibility, a source claims, but not yet an option.

Like a C-class wearing a heavy backpack. The Metris uses a unique platform, according to Mercedes-Benz, but borrows the turbocharged four-cylinder engine and automatic transmission from its compact sedan range. Its engine's output, 208 horsepower, isn't at the top of the minivan/commercial van range, but it's more than enough to put some pep in the Metris' step. Expect nicely weighted steering and a tight turning radius, as well as a healthy growl from under the hood and ride quality that allows for plenty of road feel.

That said, we would never confuse the experience of driving a sporty, luxurious C with that of a large, empty van. The Metris is fairly quick off the line, but hills and elevation changes quickly limit its outright performance. Using the paddle shifters is a helpful way to redirect the transmission that's tuned for economy, rather than eking out power. We'd like the chance to test a fully loaded Metris, after having driven one that was essentially empty.

Spare, but well-built. That was the idea behind designing a cabin for the Metris, in both cargo and passenger forms, that erred on the side of practicality over luxury. Don't expect massaging seats, COMAND, and acres of wood trim in this van. The dashboard is nicely laid out, however, and the clean and simple navigation system interface mimics the one found in the Sprinter—not the S-class. The passenger-van Metris is available in seven- or eight-passenger configurations, and the cargo van is limited to a two-passenger front row. What delighted us most about the way the Metris drives was the hushed cabin noise at speed, even in the cargo version.

Providing fleet operators with a smaller alternative to the Sprinter that's still within the Mercedes-Benz van family.

The Metris' greatest innovation is its traditional minivan character, at a time when boxy vans are becoming a rarity. Whether Mercedes-Benz's bet on the Spanish-built van will pay off is yet uncertain, but its success in the small hatchback and entry-level luxury segments were also unanticipated wins.

Funkier, and more evocative of their work-van roots. The Ram ProMaster City, for example, practically screams "I am an eccentric, Italian work van!" The Nissan NV200 emotes a narrow, slab-sided persona. The Ford Transit Connect, once an outlier, has come to define the segment, and is smaller in nearly every dimension than the Metris is. Mercedes-Benz claims that the traditional minivan segment—led by the Honda Odyssey, Toyota Sienna, and Kia Sedona—is not in the Metris' crosshairs, although we wouldn't rule out that possibility.

The least-expensive Mercedes-Benz is also its hardest-working.

Rear-wheel-drive only at launch, often-ambivalent transmission,

We like the value proposition of the Metris cargo van ($29,945), which comes very well-equipped for its price.

By the numbers: 2016 Mercedes-Benz Metris